Models of care for older persons who have lost or are in the process of losing their autonomy vary widely from one region to another. At the European Union scale, southern countries show stronger family solidarity than northern ones (Peyrache and Ogg 2017); within France, institutional care solutions are more frequently used in Brittany and the Pays-de-la Loire than elsewhere (Trabut and Gaymu 2016). These differences in care may originate in needs, resources, care service supply, and even heterogeneous preferences across France.

Pursuant to a 2004 law on local freedoms and responsibilities, social policy, including policy for older persons, was decentralized in France and is now implemented at the level of the département administrative unit*. The reason cited for this is that local actors have a better understanding of the care needs of their residents. However, the financial, human, and material resources that départements have to meet those needs, together with their social policy priorities, vary from one département to another.

This results in diversified institutional responses that are not always entirely related to older persons’ needs. The latitude granted to départements impacts on the quantity of elderly dependent care supply; that is, the number of home care services and of places available in skilled nursing care facilities (Ramos-Gorand 2015). It also means that care costs—rates for home care (Hégé et al. 2014; Hégé 2018) and for a room in a nursing home (Nirello 2015)—vary from one place to another. Last, départements determine how much of care costs will be paid for by local communities; this translates into the number of financial aid allowances to pay for care and allowance amounts (Billaud et al. 2013).

Moreover, the care cost balance to be paid by dependent persons or their families is higher in the Alps/Auvergne-Rhône-Alps and Île-de-France régions. Conversely, in the départements Nord and Pas-de-Calais, those along the Mediterranean coast, and those of the région Centre-Val de Loire, that balance is lower. For nursing facility care, rates are higher in France’s overseas départements and régions, Mediterranean coast départements, and in the région Île-de-France, and lower in Brittany, Centre-Val de Loire, and Pays-de-la-Loire.

These supply side disparities are explained by needs and resources as well as the preferences of private individuals or public actors, which differ by area. The need for care varies widely among départements. For example, Île-de-France and Brittany have relatively low proportions of dependent older persons, while the northern/Hauts-de-France and central/Centre-Val de Loire and overseas regions/régions have higher proportions (Larbi and Roy 2019).

Multilevel modeling has been used (Bringe and Golaz 2017) to relate care needs, département resources, and care service supply in order to explain the differences in nursing home and home care use across France. The analysis shows wide-ranging geographical inequalities in the probability of living in a nursing home (see Model 2 of the map below). Those inequalities are reduced when geographical accessibility to formal supply is taken into account (Model 5) and sharpened when financial accessibility (balance to be paid by user) is taken into account (Model 6). Available supply (available both in terms of quantity and cost) thus seems to shape and limit choices of care for dependent older persons. 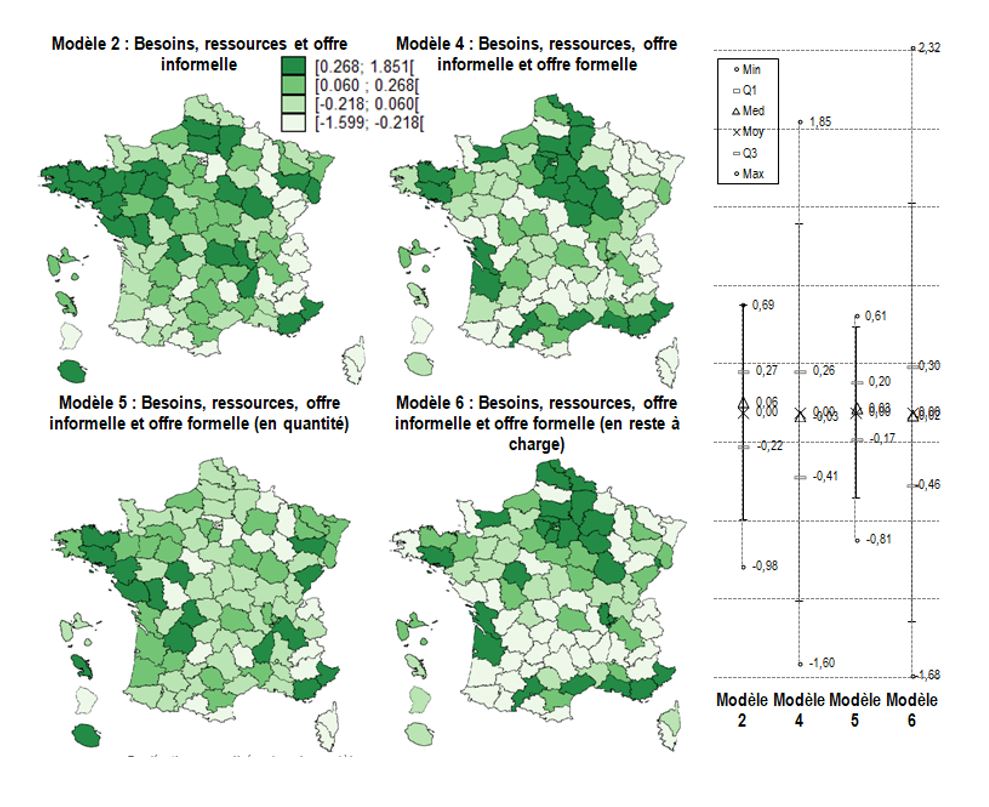