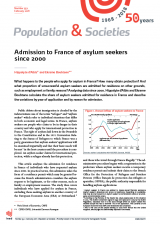 Admission to France of asylum seekers since 2000

What happens to the people who apply for asylum in France? How many obtain protection? And what proportion of unsuccessful asylum seekers are admitted for residence on other grounds, such as employment or family reasons? Analysing data since 2000, Hippolyte d’Albis and Ekrame
Boubtane calculate the share of asylum seekers admitted for residence in France and describe the variations by year of application and by reason for admission.

While the number of asylum applications in France has increased in recent years, they account for a declining share of total claims across the European Union, as France has been less concerned by recent inflows of asylum seekers than some of its European neighbours. Around one quarter of applicants are granted asylum in France, although the proportion ranges from 18% to 32% depending on the application year. More than a quarter of applicants are unsuccessful, but are ultimately admitted for residence on different grounds (education, family, employment), often many years later. Among asylum applicants in 2000, almost 60% had been admitted for residence by 31 December 2016, one third as refugees, stateless persons or beneficiaries of subsidiary protection, and slightly more than half for family reasons.

When in life is income higher than consumption? Changes in France over 30 years

Recent Demographic Trends in France: The Number of Marriages Continues to Decrease