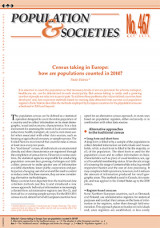 Census taking in Europe: how are populations counted in 2010?

Subscribe to the e-alert
Download
It is essential to count the population so that necessary levels of service provision for schools, transport, healthcare, etc. can be determined in each municipality. But census taking is costly, and a growing number of people are reluctant to participate. To address these problems, the industrialized countries have developed new, less expensive methods based on existing data obtained from surveys and population registers. Paolo Valente describes the methods employed by European countries for the population censuses scheduled in 2010 and beyond.
A growing number of countries are moving away from the traditional census and looking with increasing interest at new approaches. For example, in countries where they exist, population registers are often used as an alternative information source. Among the 40 European countries, 5 are conducting a census in 2010 based exclusively on registers (the Scandinavian countries and Austria), around half (21) are conducting a traditional census (Russia, practically all countries of eastern and south-eastern Europe, the United Kingdom, Ireland, Greece and Portugal), and most of the others (13) are adopting a mixed approach using data from registers and from other sources, such as total enumeration or sample surveys. France is the only country to have adopted a rolling census, introduced in 2004.