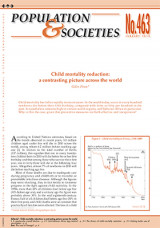 Child mortality reduction: a contrasting picture across the world

Subscribe to the e-alert
Download
Child mortality has fallen rapidly in recent years. In the world today, seven in every hundred newborns die before their fifth birthday, compared with forty or fifty per hundred in the past. It nonetheless remains high in certain world regions, sub-Saharan Africa in particular. Why is this the case, given that preventive measures are both effective and inexpensive?

Across the world, one newborn in twenty-two dies before his or her first birthday, and among those who survive, a further one in forty-three dies over the next four years. Altogether, almost 7% of newborns die before the age of five. The ine-qualities in child mortality between countries are vast. While in the most developed countries, under-five mortality has plummeted, and now stands at 0.5% or less, it is above 10% in many southern countries, notably in sub-Saharan Africa. Many children still die of infectious diseases that could be prevented by vaccination, one of the simplest and most cost-effective medical procedures in terms of disease prevention and mortality reduction.