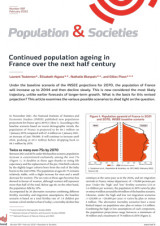 According to INSEE projections published in 2021, the population of France will range between 58 million and 79 million in 2070, with a baseline scenario of 68 million. The baseline projection forecasts a population that is older than today’s, and that will decrease slightly from 2044 onwards, whereas previous projections assumed continued growth. A surplus of deaths over births would no longer be offset by positive net migration. The new projections differ greatly from those of 2016, which had projected a population in 2070 of 76 million. The significant difference is due to the downward revisions of the size of the population in 2021 and to changes in the fertility, life expectancy, and migration assumptions.

Under the baseline scenario of the INSEE projections for 2070, the population of France will increase up to 2044 and then decline slowly. This is now considered the most likely trajectory, unlike earlier forecasts of longer-term growth. What is the basis for this revised projection? This article examines the various possible scenarios to shed light on the question.

In November 2021, the National Institute of Statistics and Economic Studies (INSEE) published new population projections for France up to 2070 [1] (Box 1). According to the baseline scenario based on recent demographic trends, the population of France is projected to be 68.1 million on 1 January 2070 compared with 67.4 million on 1 January 2021, an increase of just 700,000. It will continue to increase until 2044, peaking at 69.3 million before dropping back to 68.1 million by 2070.

A range of scenarios is defined, one of which—the baseline scenario, considered the most likely—is an extension of current trends. In the 26 other scenarios, at least one of the assumptions concerning fertility, mortality, and migration differs from the baseline scenario, resulting in a larger population (high scenarios) or a smaller population (low scenarios). These assumptions are formulated based on the proposals from a panel of experts [3].
The various scenarios are based on the assumptions of rapidly stabilizing fertility at 1.6, 1.8, or 2.0 children per woman and annual net migration (difference between arrivals and departures) of 20,000, 70,000, and 120,000 persons. The baseline mortality scenario continues the trend of mortality decline observed in the 2010s, with a male life expectancy at birth of 87.5 years in 2070, up 7.8 years from 79.7 years in 2019 (before the COVID-19 pandemic). For females, the increase is smaller, rising by 4.4 years from 85.6 to 90.0 years. On either side of this baseline assumption, the increase in life expectancy until 2070 is lowered or raised by 3.5 years for both males and females. Three complementary scenarios correspond to working assumptions: very low fertility (1.5 children per woman, close to the European Union average), constant life expectancy at its 2019 level, and zero net migration at all ages (equal numbers of arrivals and departures). The baseline scenario and the six scenarios with a difference in just one component are extended to 2121 to give longer-term projections.
The detailed results and data can be downloaded from the INSEE website [2], along with a document presenting the results of the consultation with experts used to construct the scenarios [3]. The interactive population pyramid also illustrates population change year on year and can be superimposed on other pyramids to compare the situation on different dates or under two different scenarios [2].

Between 2021 and 2070, under this baseline scenario, population increase is concentrated exclusively among the over-75s (Figure 1). It doubles at these ages thanks to rising life expectancy and the replacement of the pre-1946 birth cohorts by the slightly larger cohorts born from the end of the baby boom to the mid-1990s. The population at ages 60–75 remains relatively stable, with a slight increase for men and a small decrease for women. The sex ratio at these ages becomes less skewed in favour of women, although women still represent more than half of the total. Below age 60, on the other hand, the population falls by 10%.

Accompanied by 26 alternative scenarios combining different fertility, mortality, and migration assumptions, the baseline scenario is based on a total fertility rate of 1.8 children per woman (a level similar to that of today), a mortality decline that continues at the same pace as in the 2010s, and net migration (arrivals in France minus departures) of +70,000 persons per year. Under the ‘high’ and ‘low’ fertility scenarios (2.0 or 1.6 children per woman), the population in 2070 varies by plus or minus 4 million around the 68 million of the baseline scenario. Likewise, under the high and low net migration scenarios (+120,000 or +20,000 per year) it varies by plus or minus 4 million. The alternative mortality scenarios have a more limited impact on population size: plus or minus 2.4 million. Combining the high or low assumptions of each component, the population projections range between a minimum of 58 million and a maximum of 79 million in 2070 (Figure 2).

The degree of uncertainty varies by age (Figure 3). It is highest for the cohorts not yet born in 2021. For example, the number of persons aged 0–19 in 2070 is 14 million under the baseline scenario, but the range of results is broad: between 11 million for the low scenario and 17 million for the high scenario, i.e. 25% above or below the baseline projection. For persons aged over 75 on the other hand, already born in 2021, the extreme scenarios produce figures of 10 million to 14 million in 2070, i.e. 18% above and below the baseline projection of 12 million. The projected number of people aged over 75 between 2021 and 2070 is affected mainly by the mortality assumption. Whatever this assumption, their number increases very sharply (by 89% in the baseline scenario), as life expectancy increases and the cohorts born between 1969 and 1994 replace the depleted cohorts born before 1946.

1.2. Greater uncertainty for births than for deaths

1.3. Looking back on 50 years of changing projections

How have the assumptions used in the INSEE projections evolved over 50 years? Here, we will examine those of the baseline scenario. Life expectancy assumptions have changed considerably over the last half century (Figure 6) [4, 5].

Life expectancy at birth for both sexes combined was 72 years in 1970 (compared with 82 years in 2021), and it was believed that little further progress could be expected. After increasing sharply in the years following the Second World War and gaining almost 5 months annually in the 1950s, life expectancy rose more slowly in the 1960s, giving credence to the notion of a biological limit (Figure 6).

In the 1970 projection up to 1995, life expectancy continues to increase, initially at the same pace as in the 1960s and then more slowly. The following projection, published in 1979, is more pessimistic, with an even slower rise in life expectancy that levels off at 73.8 years in 2000 for both sexes combined. These two projections severely underestimated the true rate of progress. The 1986 projection corrected for these discrepancies by anticipating a much faster rise in life expectancy while continuing to assume it would slow down and level off over the long term.

Despite this adjustment, life expectancy again progressed more quickly than projected, and the expected ceiling was reached and surpassed in 1997. Observing that even the raised life expectancy ceilings were regularly exceeded after a few years, subsequent projections abandoned the idea of a biological limit. Recent trends are extrapolated across the entire projection period, with no upper limit, and this corresponds quite well to the trends observed up to now.

Fertility projections, by contrast, have changed little over 50 years (Table 1). Apart from the projection published in 1970, which forecast much higher fertility than the others (the baby boom was still ongoing at the time, though reaching its end), revisions have been minor, each time reflecting recent upward or downward changes in the fertility rate. While stable since the end of the baby boom, this rate has fluctuated between 1.7 and 2.0 children per woman on average.

Assumptions about net migration have changed significantly over the last 50 years. Projected levels remained high in 1970 (130,000 per year) but dropped sharply in the two following projections (published in 1979 and 1986) after the government decision to end labour migration in 1973. Net migration then varied by a factor of 2 in subsequent projections, between 50,000 and 100,000 per year. A 50,000 difference in net migration affects long-term population growth to the same extent as a difference in the total fertility rate of 0.2 children per woman (see Figure 2).

What do these new projections tell us? They confirm that population ageing will continue until 2040, followed by a likely slowing of its increase [1]. Although the projected size of the population in 2070 strongly depends on the choice of assumptions, all scenarios predict a large rise in the proportion of old people up to this time horizon. The extent of variations between scenarios and the effects of adjustments to the baseline scenario point up the uncertainties associated with long-term population projections, while confirming the inevitable process of population ageing. The new baseline projection indicates that a slow decrease in population from 2044 onwards is the most likely future scenario if current trends persist.

The 2021 projections differ greatly from those of 2016 [6], with a forecast reduction of 8 million, from 76 to 68 million, in the size of the population of France in 2070 under the baseline scenario. This represents an increase of just 0.7 million with respect to the 2021 population (67.4 million), compared with 9 million in the earlier projection (Figures 7). Moreover, while growth remains positive throughout the projection period under the 2016 baseline scenario, that of 2021 forecasts a slow population decline from 2044 onwards (Figure 7)

These differences result from changes in the fertility, mortality, and migration assumptions, and from adjustments to 2021 population estimates. The contribution of each assumption adjustment to the change in the 2070 figure can be estimated by constructing scenarios where just one factor is modified (the method is detailed in the Online Appendix at: https://doi.org/10.34847/nkl.fb4e8gnj). The downward revision of fertility between the 2016 and 2021 projections (1.95 children per woman vs. 1.80) lowers the population by 3.6 million in 2070 due to the reduction in births. This is the primary factor of change. The next factor is the downward revision of progress in life expectancy which produces a 2.1 million reduction in population size in 2070. Third, while total net migration remains unchanged across the two projections, its sex and age structure has been modified for the 2021 projection. These changes affect the number of births and deaths, leading to a reduction of the population by 1.4 million in 2070. The fourth factor is the downward adjustment of the population size on 1 January 2021, involving a reduction of 700,000 inhabitants, which leads to 1.2 million fewer in 2070 because these fewer people lead to fewer children (for details, see Online Appendix: https://doi.org/10.34847/nkl.fb4e8gnj).

According to INSEE projections published in 2021, the population of France will range between 58 million and 79 million in 2070, with a baseline scenario of 68 million. The baseline projection forecasts a population that is older than today’s, and that will decrease slightly from 2044 onwards, whereas previous projections assumed continued growth. A surplus of deaths over births would no longer be offset by positive net migration. The new projections differ greatly from those of 2016, which had projected a population in 2070 of 76 million. The significant difference is due to the downward revisions of the size of the population in 2021 and to changes in the fertility, life expectancy, and migration assumptions.

Laurent Toulemon, Élisabeth Algava, Nathalie Blanpain, Gilles Pison,  Continued population ageing in France over the next half century, 2022, Population and Societies, no.597