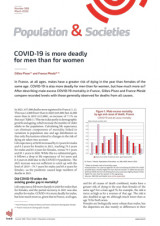 From around age 50, male excess mortality from COVID-19 is higher than that observed for all-cause mortality. This difference may reflect a higher infection risk for men due to their behaviour and activities, but also a higher prevalence of comorbidities liable to increase case fatality rates (risk of dying of the disease

In France, at all ages, males have a greater risk of dying in the year than females of the same age. COVID-19 is also more deadly for men than for women, but how much more so? After describing male excess COVID-19 mortality in France, Gilles Pison and France Meslé compare recorded levels with those generally observed for deaths from all causes.

In 2021, 657,000 deaths were registered in France [1, 2]. This was 12,000 fewer than in 2020 (669,000) but 44,000 more than in 2019 (613,000), an increase of 7.1% on that year (Table 1). This rise is due partly to demographic growth and ageing, which increase the number of older adults in the population. Calculating life expectancy can eliminate components of mortality linked to variations in population size and age distribution so that only fluctuations related to changes in the risk of dying are taken into account.

1.1. Did COVID-19 widen the existing gender gap in mortality?

Life expectancy fell more sharply in 2020 for males than for females, and the partial recovery in 2021 was also smaller for males. COVID-19 is more deadly for males, but how much more so, given that in France, at all ages, and for all causes of death combined, males have a greater risk of dying in the year than females of the same age? For a man aged 70, for example, the risk is twice as high as for a woman of that age. The risk is also doubled at age 40, although much lower than at age 70 for both sexes.

Females are biologically more robust than males, but the disparities are due mainly to differences in their activities and behaviours. Throughout their lives, men take more risks than women and more frequently engage in unhealthy behaviours. For example, men drink and smoke more than women do. Women are generally more attentive to their health and more frequently seek healthcare [3].

Consequently, all-cause mortality is higher for males than for females. Male excess mortality varies by age, with a ‘double-spike’ profile (Figure 1 and online appendix [in French]: https://nakala.fr/10.34847/nkl.ce3dox36): the first spike occurs at young adult ages, when mortality is very low and deaths are due mainly to external causes (suicides and accidents, traffic accidents especially), and the second at ages 55–74.

For men aged up to 54 years, excess mortality due to COVID-19 is lower than excess all-cause mortality. Starting with the 55–64 age group, however, the situation is reversed (Figure 1). This may reflect a higher infection risk for men due to their behaviour—less compliance with social distancing rules, greater social interaction, less remote working—but also higher prevalence of comorbidities (hypertension, diabetes) than women over age 50 [5], resulting in increased case fatality rates (risk of dying of the disease once infected).

Male excess mortality from COVID-19 has evolved since the start of the pandemic (Figure 2). Across all periods, it peaks at around 65–74 years, but in the first half of 2020, a first spike is observed at ages 25–34. This could be explained by greater risk exposure among young men than young women, as is the case for accidental deaths, but also by the high COVID-19 mortality among young male foreigners. The first wave was especially deadly for foreign-born people, especially those from Africa and Asia. They are very numerous in the regions most affected by this wave (Paris region and eastern France) and often hold jobs with high exposure to infection and for which remote working is not possible. And among these African- and Asian-born foreigners, mortality was higher for men than for women [6].

This first spike at ages 25–34 levelled off over time, with both sexes becoming more equally exposed to the virus as normal activities gradually resumed. The main spike at ages 65–74 also partly disappeared in the second half of 2021, perhaps thanks to vaccination. At these ages, more than 10% of women are unvaccinated, compared with just 8% of men [7] (see online appendix), perhaps because men took priority for vaccination over women of the same age due to their higher prevalence of comorbidities. Men also appear more willing to be vaccinated than women, or at least more compliant with health guidelines. This is surprising, given that men are generally found to pay less attention to their health than women.

1.2. How does France compare with other countries?

In-depth analyses taking account of comorbidities and detailed vaccination rates by sex and age will be needed to shed light on these differentials. But we do not yet have this information for all countries; let us hope it becomes available soon.

The population of France on 1 January 2022 was an estimated 67.8 million, of which 65.6 million in metropolitan France (mainland France and Corsica) and 2.2 million in the overseas departments and regions [1]. The population grew by 221,000 in 2021 (+0.33%). One-third of this increase was attributable to a surplus of births over deaths and two-thirds to net migration, i.e. the difference between migration inflows and outflows, estimated by INSEE at 140,000.

The trend towards later childbearing observed over the last 4 decades is continuing, and the mean age of women who gave birth in 2021 was 30.9 years. Mean age at childbirth has increased steadily since 1977, when it stood at 26.5 years.

Cohort fertility trends show that the women born in 1971, who turned 50 in 2021 and who have now completed their reproductive lives, had an average of 1.99 children. Women born in 1981, who turned 40 in 2021, have already had 1.99 children, and the total should reach 2.05 at least by the time they are 50. For the youngest cohorts who still have many childbearing years ahead of them, it is risky to predict their completed fertility, although it is likely to remain at around two children per woman.

A change in the seasonality of births

While birth numbers were similar in 2020 and 2021, the COVID-19 pandemic caused a drop in births in early 2021 [2]. During the first lockdown, from 17 March to 11 May 2020, some people predicted a baby boom 9 months later, arguing that couples would take advantage of movement restrictions and increased time together at home to start a family or have another child.

But the number of conceptions actually decreased: 13% fewer babies were born in January 2021—most of whom were conceived in April 2020—than in January 2020. Likewise, 5% fewer babies were conceived in May 2020, at the end of the lockdown or just afterwards, resulting in fewer births in February 2021 than in the previous February. In subsequent months, however, births were generally more numerous than in the equivalent months of 2020, making up for the shortfall earlier in the year. By the end of 2021, the number of births had caught up with that of 2020.

The decrease in conceptions during the first lockdown was not a surprise [8]. It is a phenomenon often observed during economic crises, when couples may decide to postpone their childbearing plans in response to rising unemployment and uncertainty about the future. Crises are often followed by a decrease in births 1 or 2 years later. But most of these births are simply postponed, and births are often recuperated when the situation improves.

This was the case for the first lockdown, although recuperation was rapid. The second lockdown does not appear to have affected conceptions and did not prevent the recovery in birth numbers. It was less strict than the first, and couples stopped putting their plans on hold after realizing that the pandemic would last longer than first imagined. Family and social policies, alongside specific economic measures introduced during the pandemic, likely acted as a shock absorber.

From around age 50, male excess mortality from COVID-19 is higher than that observed for all-cause mortality. This difference may reflect a higher infection risk for men due to their behaviour and activities, but also a higher prevalence of comorbidities liable to increase case fatality rates (risk of dying of the disease once infected).

Data for Figures (in French)

Gilles Pison, France Meslé, COVID-19 is more deadly for men than for women, 2022, Population and Societies, no. 598