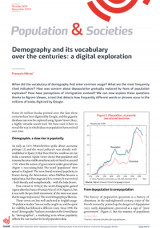 Demography and its vocabulary over the centuries: a digital exploration

Subscribe to the e-alert
Download
When did the vocabulary of demography first enter common usage? What are the most frequently cited indicators? How was concern about depopulation gradually replaced by fears of population explosion? How have perceptions of immigration evolved? We can now explore these questions thanks to Ngram Viewer, a tool that detects how frequently different words or phrases occur in the millions of books digitized by Google.

Our ideas about population have varied continuously over the centuries, as illustrated in the vocabulary changes detected by Ngram Viewer in the vast corpus of books digitized by Google. For example, the French word démographie, first coined in 1855, did not take off until after the Great War, in response to falling birth rates, as expressed by the term dénatalité. The 1960s were haunted by the threat of surpeuplement (over population). Assimilation des immigrés (immigrant assimilation) has never really been a central concept in France, unlike intégration des immigrés (immigrant integration), which gained popularity in the 1980s. Espérance de vie (life expectancy) is gaining ground and has overtaken taux de fécondité (fertility rate). Far from being certain and unchanging, our vision of population questions is marked by frequent discontinuities, the most recent dating from the 1980s.

Lost generations: The demographic impact of the Great War

What happens when the census population figure does not match the estimates?

Language transmission in France in the course of the 20th century.

The world population over the next three centuries: explosion, implosion or equilibrium?

Two children per woman in France in 2006: are immigrants to blame?

No English please! Survey on the languages used for research and teaching in France