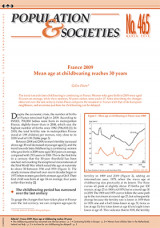 Subscribe to the e-alert
Download
The trend towards later childbearing is continuing in France. Women who gave birth in 2009 were aged 30 years on average, while their mothers, 30 years earlier, were under 27. After describing the changes observed over the last century, Gilles Pison compares the situation in France with that of its European neighbours, and examines just how far childbearing can be delayed.

Despite the economic crisis, fertility in France remains high, with 1.98 children per woman on average in 2009, compared with 1.99 in 2008. Age at childbearing continues to increase, and women who gave birth in 2008 were aged 30.0 years on average, versus 29.9 in 2008. Over the last century, age at maternity has become more concentrated around the mean, as the number of large families has de clined. The trend towards later childbearing is common to all developed countries. In Europe, the age at childbearing is highest in the Netherlands, Ireland and Italy.