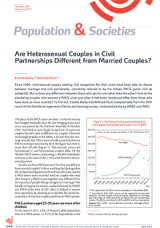 Are Heterosexual Couples in Civil Partnerships Different from Married Couples?

Subscribe to the e-alert
Download
Since 1999, heterosexual couples seeking civil recognition for their union have been able to choose between marriage and civil partnership, commonly referred to by the initials PACS (pacte civil desolidarité). But is there any difference between those who opt for one rather than the other? And do the pioneering couples who entered a PACS union just after it had been introduced differ from those whohave done so more recently? To find out, Estelle Bailly and Wilfried Rault analysed data from the 2011 round of the Famille et Logements (family and housing) survey, conducted jointly by INSEE and INED.
In 1999, the French Government introduced civil partnerships, known as PACS (pacte civil de solidarité), toprovide legal recognition to same-sex couples, although
they were also open to different-sex couples. Since then, they have proved increasingly popular. By 2010, the initialfigure of around 20,000 new PACS unions per year had risen to more than 205,000, most of these contracted by different-sex couples. So is there any difference between those who have optedfor marriage since 1999 and those who have chosen to become PACS partners? While not diametrically opposed,the two groups do have several distinguishing features.
PACS partners are more often childless and more of them are highly educated. More of them are in higher-level orintermediate occupations, and they are more often public sector employees.Nevertheless, the gap between the two has tended to narrowin recent years, especially since 2008. Today’s PACS partners differ less from their married peers than thePACS "pioneers" did. PACS unions have become democratized, in the sense that their numbers have increaseddramatically and they have spread to social groups that initially showed little interest in them.