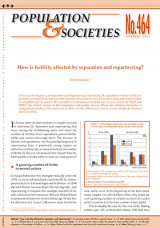 How is fertility affected by separation and repartnering?

In France, the frequency of separation and repartnering is increasing. Do separations reduce fertility by preventing births? Or do they have the opposite effect, with second unions providing new opportunities for childbearing? To answer this question, Éva Beaujouan analyses two recent surveys by INED and INSEE: the French version of the Generation and Gender Survey (Étude des relations familiales et intergénérationnelles, Erfi) conducted in 2005, and the 1999 family history survey (Étude de l’histoire familiale, EHF).

Separation and repartnering are becoming increasingly frequent in France, reflecting a change in conjugal behaviour which is also affecting fertility. While almost all children are born to couples, married or otherwise, a growing proportion are born in second unions. Among men and women born before 1950, 1.4% and 0.7%, respectively, had their first child in a second union, compared with 14% of men and 9% of women in the 1960-1969 cohorts. For both men and women in a second union, the probability of having another child at age 35 is 2.5 times higher than for those in an intact first union. But men who form a new union are more likely to have a child than women of the same age who repartner, as they tend to form couples with younger women. Last, individuals who have experienced two or more unions are more likely to be childless or to have 4 or 5 children than those in intact first unions.

Has childlessness peaked in Europe?

Are family sizes of parents and children still related? Revisiting the cross-generationalrelationship over the last century