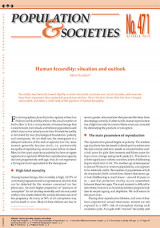 Subscribe to the e-alert
Download
Fecundity may have decreased slightly in some industrial countries over recent decades, and concerns have been expressed about potential population decline. Henri Leridon shows that this fear is largely unfounded, and takes a closer look at the question of human fecundity.
The probability that a woman having unprotected sexual intercourse will conceive over an ovulation cycle, also known as fecundability, is no more than 20-25% on average. A couple with "normal" fecundity generally takes several months to achieve a pregnancy. This long waiting time is due in part to high fetal mortality, since more than half of all conceptions do not result in a live birth. Fecundability varies from one couple to another. Out of 100 couples who decide to have a child, 90 obtain a pregnancy within 12 months. The 10 remaining unsuccessful couples have a lower mean fecundability, but most will nonetheless conceive within the following 12 months. So an inability to conceive within 12 months does not signify sterility, as is sometimes suggested. Fecundity may have declined among certain western populations, notably because of lower sperm quality. This should not reduce fertility, i.e. the actual number of children born, but may simply lengthen the waiting time to pregnancy.