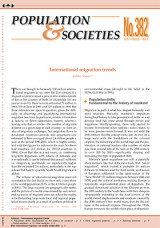 There are thought to be nearly 150 million international migrants as we enter the 21st century, if a migrant is taken to mean a person who resides outside of his or her country of birth or citizenship for one year or more [1]. There were an estimated 75 million in 1965, 105 million in 1985 and 120 million in 1990. But these estimates are open to question, given the difficulty of observing and quantifying international migration (see box). In particular, reliable information is lacking on flows—departures, transits, returns— leaving only that on stocks—the number of migrants resident on a given date in each country—to form an idea of migratory exchanges. Net migration flows to developed countries—arrivals less departures—are estimated to have averaged about 2.4 million people a year in the period 1990-2000, which is highly consistent with the figures for inflows to the main Northern host countries (2.7 million for OECD countries in 1998). Given that this is a net count, i.e. combining long-term departures with returns of nationals and non-nationals, it can be inferred that annual outflows, i.e. emigration, worldwide are significantly higher than the estimated 2.4 million, particularly if the significant but hard to quantify South-South migration is added.