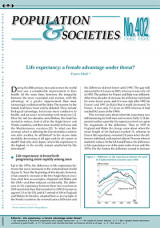 During the 20th century, men and women the world over saw a considerable improvement in their health. At the same time, however, the inequality between the sexes expanded and women, with the advantage of a greater improvement than men, increasingly outdistanced the latter. The reasons for the female lead have been widely debated. They include biological advantage, behaviour more conducive to health, and an easier relationship with medicine [1]. Over the last two decades, nevertheless, this lead has started to reduce, first of all in the Anglo-Saxon and Nordic countries, and then more recently in France and the Mediterranean countries [2]. To what can this reversal, which is affecting the low-mortality countries one after another, be attributed? Is the excess male mortality decreasing at all ages and for all causes of death? And why does Japan, where life expectancy is the highest in the world, remain unaffected by the movement?

Recent Improvements in Life Expectancy in France: Men are Starting to Catch Up

A spectacular decline in influenza mortality: the role of vaccination

Living beyond the age of 100