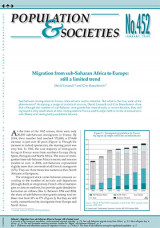 Migration from sub-Saharan Africa to Europe:still a limited trend

Subscribe to the e-alert
Download
Sub-Saharan immigration to France often attracts media attention. But what is the true scale of the phenomenon? Analysing a range of statistical sources, David Lessault and Cris Beauchemin show that although the number of sub-Saharan immigrants has risen sharply in recent decades, they still represent a very small share of total immigration to France and Europe, both in terms of annual arri-vals (flows) and immigrant populations (stocks).

At the time of the 1962 census, there were only 20,000 sub-Saharan immigrants in France, compared with 570,000 in 2004, a 27-fold increase in just over 40 years. Though the increase is indeed large, the starting point was very low. In 2004, sub-Saharan Africans represented slightly more than one-tenth of all French immigrants (12%). Including undocumented immigrants does not change the picture. It simply raises the proportion of sub-Saharans from 9% to a maximum of 11% of the total immigrant population in France. Sub-Saharans represent only a minority of immigrants in France, and the same is true in the other main receiving countries. In 2000, they accounted for only 4% of the immigrants residing in OECD countries. And even in the new European receiving countries – Spain and Italy – they represent less than 10% of the immigrant population, irregular immigrants included (4% in Spain and 8% in Italy in 2006). In practice, few sub-Saharans migrate away from Africa. Nine in ten sub-Saharan refugees remain on the continent and settle in a neighbouring country. Practically on a level with Asia, sub-Saharan Africa is the region where the propensity to emigrate to OECD countries is by far the world’s lowest (in 2000, fewer than one person in a hundred born in sub-Saharan Africa was living in an OECD country).

Transnationalism and Immigrant Assimilation in France: Between Here and There?