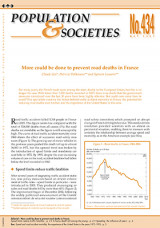 More could be done to prevent road deaths in France

For many years, the French roads were among the most deadly in the European Union, but this is no longer the case. With fewer than 5,500 deaths recorded in 2005, there is no doubt that the government measures introduced over the last 30 years have been highly effective. But could even more lives be saved? Five specialists examine the factors behind traffic accident mortality in France, the potential for reducing road deaths even further, and the experience of the United States in this area.

In France, traffic accident mortality peaked at 18,000 deaths in 1972 before falling back quite steadily to just 5,500 deaths in 2005 as successive road safety measures were introduced. Among the various factors behind this fall, the introduction of speed limits and mandatory seat belts (1972) followed by a stricter enforcement policy from 2003 played a decisive role. The recent decrease in average speed has also reduced the number of road deaths.
Traffic accident mortality remains very high among young people however (one-fifth of all road deaths), men in particular. For this age group, the MARC survey of 18-24 year-olds reveals the importance of peer influence on risk behaviour (speeding, drink-driving, non-use of a seat belt, etc). The survey also shows the propensity of young people to play down such behaviour: though the motives vary, the "intention to break the highway code" is equally common among men and women and among novice and more experienced drivers.