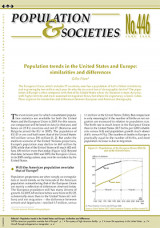 Population trends in the United States and Europe: similarities and differences

Subscribe to the e-alert
Download
The European Union, which includes 27 countries, now has a population of half a billion inhabitants, and is growing by two million each year. So why the recurrent fear of demographic decline? The population of Europe is often compared with that of the United States where the situation is more dynamic, with higher fertility and more sustained immigration flows, but where life expectancy is lower. Gilles Pison explains the similarities and differences between European and American demography.

In 2005, the population of the 25 countries of the European Union was one and a half times that of the United States: 463 million versus 296 million. But over the last twenty years, population growth in Europe has been three and a half times slower than in the United States, where sustained migratory growth has boosted rapid natural growth. In Europe, on the other hand, immigration is now the only driver of population increase. Rapid natural growth in the United States is due partly to high fertility: 2.05 children on average in 2005 versus 1.52 in EU-25. On the other side of the coin, Americans, women in particular, have a shorter length of life than Europeans, with a female life expectancy of 80.4 years versus 82.0 years in Europe.

Being a single man in rural China