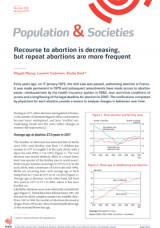 Recourse to abortion is decreasing, but repeat abortions are more frequent

Forty years ago, on 17 January 1975, the Veil Law was passed, authorizing abortion in France. It was made permanent in 1979 and subsequent amendments have made access to abortion easier: reimbursement by the health insurance system in 1982, less restrictive conditions of access and a lengthening of the legal deadline for abortion in 2001. The notifications completed by physicians for each abortion provide a means to analyse changes in behaviour over time.

In 2011, there were nearly 210,000 abortions in France, corresponding to 0.53 per woman during her lifetime. After falling between 1975 and 1995, numbers of abortions rose again slightly and have levelled out since around 2010. Average age at abortion remains stable, at 27.5 years. The proportion of repeat abortions is increasing steadily. One-third of women have at least one abortion during their lives, of whom 10% have two and 4% three or more. As the proportion of medical abortions rises, average gestational age at abortion is falling. It stood at 6.4 weeks in 2011, down from 7.1 in 2002.

Recent Demographic Trends in France: The Number of Marriages Continues to Decrease

Childlessness: a life choice that goes against the norm