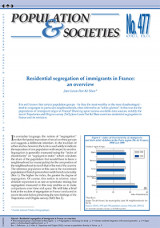 Residential segregation of immigrants in France: an over view

Subscribe to the e-alert
Download
It is well known that certain population groups - be they the most wealthy or the most disadvantaged - tend to congregate in particular neighbourhoods, often referred to as "urban ghettos". Is this true for the populations of immigrant origin in France? Drawing upon various available data sources, notably the recent Trajectories and Origins survey (TeO), Jean-Louis Pan Ké Shon examines residential segregation in France and its evolution.
In France, residential segregation of immigrant populations from North Africa, sub-Saharan African, Turkey and Asia is high. Between 1990 and 1999, the segregation of Turks, Algerians and Moroccans increased, while for Tunisians it remained stable and for sub-Saharan Africans it decreased. Viewed over a longer timescale (1968-1999), segregation has decreased for all immigrant populations. As shown by the Trajectories and Origins survey (TeO) conducted by INED in 2008, 42% of immigrants from Sub- Saharan Africa, North Africa and Turkey live in the 10% of neighbourhoods where unemployment is highest, and they represent 28% of the population of disadvantaged neighbourhoods. The second generations are less concentrated in these neighbourhoods, however, indicating that residential integration increases from one generation to the next.

Suicide in prison : a comparison between France and its European neighbours