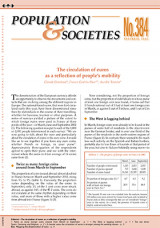 The circulation of euros as a reflection on people mobility

Subscribe to the e-alert
Download
The circulation of the European currency provides an indicator of the movements and contacts between the different regions of Europe.

The dissemination of the European currency affords an opportunity to observe the movements and contacts that are evolving among the different regions in Europe. The national-faced euros, that were first circulated early this year, have been disseminated since then by individuals in the course of their travelling, whether for business, tourism or other purposes. A series of surveys yielded a picture of the extent to which foreign euros were used in France at three points of the year—in March, June and September 2002 (1). The following question was put to each of the 1,000 or 2,000 people interviewed in each survey: “We are now going to talk about the euro and particularly about the circulation of coins in the euro zone. I would like us to see together if you have any euro coins, whether French or foreign, in your purse”. Approximately three-quarters of the respondents agreed to open their purse and see with the interviewer where the euros in it (an average of 14 coins) came from (2).

The unequal distribution of population and wealth in the world.