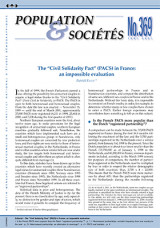 The "Civil Solidarity Pact" (PACS) in France an impossible evaluation.

Northern European countries were the first, about twelve years ago, to make provisions for the legal recognition of unmarried couples; southern European countries gradually followed suit. Nonetheless, the countries which have implemented such laws are a small and heterogeneous group: in Scandinavia, only homosexual couples are concerned by new protection laws, and their rights are very similar to those of heterosexual married couples; in the Netherlands, in France and in other countries where similar bills are now under study, the law targets both homosexual and heterosexual couples and offers them an option which is often quite different from marriage