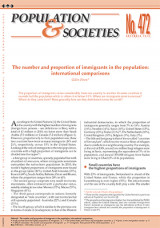 The number and proportion of immigrants in the population: international comparisons

Subscribe to the e-alert
Download
The proportion of immigrants varies considerably from one country to another. In some countries it exceeds half the population while in others it is below 0.1%. Where are immigrants most numerous? Where do they come from? More generally, how are they distributed across the world?

The United States has the highest number of immigrants (foreign born persons) in the world, with a total of 43 million, six times more than Saudi Arabia (7.3 million) or Canada (7.2 million). However, relative to their population size,the two latter countries have twice as many immigrants: 28% and 21%, respectively, compared to 13% in the United States. Small countries have the highest relative number of immigrants. Switzerland, with 23% of immigrants, is ahead of the United States, while in Luxemburg the proportion is even higher (35%). In the old immigration countries, like the United States and France, the immigrant population built up gradually. Although moderate at certain periods, like in France today, the migrant inflow has remained almost uninterrupted over more than a century. In recent immigration countries, such as Spain, the immigrant population has grown very rapidly, with massive inflows in recent years.