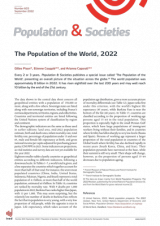 Every 2 or 3 years, Population & Societies publishes a special issue called ‘The Population of the World’, presenting an overall picture of the situation across the globe.1 The world population was approximately 8 billion in 2022. It has risen eightfold over the last 200 years and may well reach 10 billion by the end of the 21st century.

The data shown in the central data sheet concern all geopolitical entities with a population of 150,000 or more, along with a few others. Sovereign states are listed along with non-sovereign territories, including France’s overseas departments, territories, regions, and collectivities. Countries and territorial entities are listed following the United Nations system of classification by region and continent.

The demographic indicators are the same as those used in earlier editions: land area, mid-2022 population estimate, birth and death rates, infant mortality rate, total fertility rate, percentage of population under 15 and over 65, male and female life expectancy at birth, and gross national income per capita adjusted for purchasing power parity (GNI PPP) in 2021. Some indicators are projections, as vital statistics and survey data are not yet available for the year 2022.

Eighteen smaller tables classify countries or geopolitical entities according to different indicators, following a downward scale. In Tables 1–7, a world total is given, and a line separates the countries which together account for more than half of that total. For instance, the seven most populated countries (China, India, United States, Indonesia, Pakistan, Nigeria, and Brazil) represent a total population of 4.1 billion, or more than half of the world population, estimated at 8 billion. In Table 10, countries are ranked by mortality rate. With 9 deaths per 1,000 population in 2022, Burkina Faso ranks higher than Japan, with 13 per 1,000. This may seem surprising, but the relatively low number of deaths in Burkina Faso reflects the fact that its population is very young, with a very low proportion of old people, while the opposite is true in Japan. Life expectancy, which takes account of the population age distribution, gives a more accurate picture of mortality differentials (see Table 12). Japan ranks first under this criterion, with the world’s highest life expectancy (85 years), while Burkina Faso is near the bottom of the list (60 years). In Table 17, countries are classified according to the proportion of working-age persons aged 15–64 in the total population. This proportion is especially high in the small Persian Gulf states, which have large populations of immigrant workers living without their families, and in countries where fertility has fallen sharply to very low levels (Russia and Spain). Persons of working age represent a larger proportion of the total population in countries of the Global South where fertility has also declined rapidly in recent years (South Korea, China, and Iran). Their population pyramids have narrowed at the base, while their summit is still very small. Their shape will change, however, as the proportion of persons aged 15–64 decreases due to population ageing.

The tables in ‘The Population of the World’ should not be used as time series. Fluctuations in values from year to year often reflect revisions based on new data or estimates rather than actual changes in levels. Additional information on likely trends and consistent time series can be found in documents published by the organizations mentioned in the text.

Area. This refers to the land area ortotal area of the country, excluding area under inland water bodies, i.e. major rivers and lakes. Variations are due to updates and revised data provided by the countries, or to the use of different sources, and do not necessarily reflect an actual change in the country’s area.

Population mid-2022. The figures are projections calculated by the United Nations based on a recent census or official national data. The effects of refugee movements, the massive presence of foreign workers, and population displacements due to contemporary political events are taken into account where possible. Such events can lead to a high degree of uncertainty in the estimates.

GNI PPP. Gross national income converted to US dollars using a purchasing-power-parity factor; this indicator is not available for all countries.

1.1. To find out more about the world population, visit the INED website at
www.ined.fr/en

The ‘Graphs and Maps’ pages provide a wide array of information about the world population.

• Play interactive population games using the population simulator to look into the future, or go to ‘The population and me’ to see where you stand in the world population.

The website also features a host of animations, videos, fact sheets, and publications.

The data are drawn mainly from World Population Prospects: The 2022 Revision, published by the United Nations Population Division [1], and from the World Bank for gross national income [2].