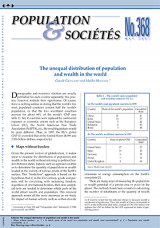 The unequal distribution of population and wealth in the world.

Demographic and economic statistics are usually published for each country separately; this practice, however, restricts their significance. Of course, there is nothing untrue in stating that the world’s five most populated countries contain half the world’s population, or that the five wealthiest countries account for about 60% of the world’s GNP (see table 1). Yet, if countries were replaced by continental expanses or economic unions such as the European Union (EU), the North American Free Trade Association (NAFTA), etc., the resulting picture would be quite different. Thus, in 1997, the EU’s global GNP (1) exceeded that of the United States (8,598 and
7,924 billion dollars, respectively).

The circulation of euros as a reflection on people mobility