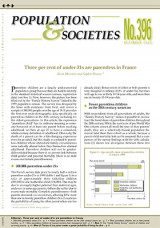 Three per cent of under-21s are parentless in France

Parentless children are a largely undocumented population group because they are hard to identify in the standard statistical sources (census, registration data) (see box 1). Now, however, the picture has been filled out by the “Family History Survey” linked to the 1999 population census. The survey was designed by the Insee with assistance from Ined, and covers a sample of 380,000 people over the age of 18. It provides the first-ever socio-demographic data specifically on parentless children in the 20th century, including for the oldest generations. In this article, the expression “parentless child” has its ordinary meaning as someone bereaved of at least one parent before reaching adulthood, set here at age 21 to have a consistent, whole-century definition of adulthood. Obviously, the death of a parent can be a life-changing experience even for an adult, but this study is confined to parentless children whose immediate family circumstances were radically altered before they themselves attained adulthood. Parentless children will not be genderdifferentiated because there is no proven link between child gender and parental mortality.

A majority of people would prefer to die at home, but few actually do so

The European Union at the Time of Enlargement

Baby boomers: towards the end of an era

How many people live alone in France?

Age, Generations and the Social Contract