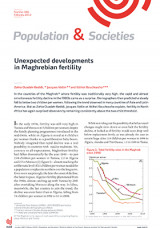 Subscribe to the e-alert
Download
In the countries of the Maghreb (1) where fertility was traditionally very high, the rapid and almost simultaneous fertility decline in the 1980s came as a surprise. Demographers then predicted a steady fall to below two children per women, following the trend observed in many countries of Asia and Latin America. But as Zahia Ouadah-Bedidi, Jacques Vallin et Ibtihel Bouchoucha explain, fertility in North Africa has again surprised observers by remaining consistently above the two-child threshold.

After converging towards replacement level, fertility in the Maghreb is now following contrasting trends. In Tunisia, the total fertility rate (TFR) has levelled off  and remained stable at 2.1 children perwoman since 1999. In Algeria, after dipping to 2.2 in the early 2000s, fertility has increased steadily, reaching almost 2.9 in 2010. In Morocco and Libya, meanwhile, where fertility was still above replacement in 2000, the TFR has continued its rapid decline, down to 2.2 and 2.5 children per woman, respectively. Not only has fertility remained above replacement level in all of these countries, but Algeria has even seen a sharp upturn in the last decade. As in the past for fertility decline, the change in age at marriage is now the key factor behind the stabilization at 2 children per woman in Tunisia and in the increase to almost 3 in Algeria. Then again, perhaps the two-child model has lost its appeal in the latter country.