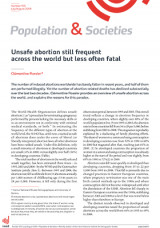 The number of induced abortions worldwide has barely fallen in recent years, and half of them are performed illegally. Yet the number of abortion-related deaths has declined substantially over the last two decades. Clémentine Rossier provides an overview of unsafe abortion across the world, and explains the reasons for this paradox.

The frequency of induced abortions fell worldwide in the 1990s, from 35 abortions per 1,000 women of childbearing age (15-44 years) in 1995 to 29 per 1,000 in 2003. But it stabilized in the 2000s (28per 1,000 in 2008) as the spread of contraceptive use slowed down in developing countries. The proportion of unsafe abortions, defined by the WHO as abortions "performed by persons lacking the necessary skills or in an environment not in conformity with minimal medical standards, or both,"did not fall, however, and still represents nearly half of all elective terminations (49% in 2008). Paradoxically, abortion-related mortality has been falling steadily for two decades, from 60 maternal deaths per 100,000 live births in 1990 to 40 per100,000 in 2008. The drop has been particularly pronounced in Latin America, even though abortion is still strongly condemned there. This development is linked in part to the spread of medical abortion in countries where it nonetheless remains illegal. Today, illegal no longer systematically means unsafe.