Effects of drug use on life expectancy in the United States

The United States ranks last in life expectancy among high-income countries. In the last nearly twenty years, excess US mortality has been particularly concentrated among people of working age, also the group hardest hit by the increase in drug deaths.

What has the impact of drug-related mortality been on life expectancy in the US and the gap between it and life expectancy in other high-income countries? In “The contribution of drug-related deaths to the US disadvantage in mortality,” demographer Magali Barbieri estimated the mortality rates by age for the 2000-2014 period in the United States for seven causes of death, including drug use, and compared them to the rates in 11 European countries—Austria, Belgium, Denmark, Finland, France, Germany, Ireland, Norway, Spain, Sweden, and United Kingdom—plus Japan.

In 2000, drug-related death rates in the US—7.1 per 100,000 for men and 3 per 100,000 for women—were not too different from rates in the 12 other countries. After that date levels in the latter remained stable while rising sharply in the US. By 2017 the overall rate there had reached 22 per 100,000 people: Between 1980 to 2016, the age-standardized drug-related mortality rate increased more than 20-fold in the USA. The risk of dying from an overdose of opioid drugs is five times higher in the US than in France. Northern European countries and the UK are the hardest-hit European comparison countries, while remaining below the US.

Drug-related mortality appears to be higher in the USA than in all comparison countries, for virtually every age group from 10 to 70 years and for both men and women. … Drug-related mortality explains up to 30% of the gap in young and mid-adulthood between the USA and several of the comparison countries … but up to 40% among working-age men. Above age 65 the impact of drug use on mortality diminishes as rates for other causes of deaths are much higher.

Of all the causes of death studied, drug overdose is the only one that has shown a steep increase since 2000. Given the considerable rise in the number of drug-related deaths in the US since 2014 (the last year of comparison), the gap in life expectancy at birth between the United States and the other 12 countries can be expected to widen further in the coming years.

This study focuses exclusively on the direct effects of drug use (the average daily dose of narcotic drug consumption per million inhabitants is estimated to have reached 37,000 in the United States in 2015, compared with less than 10,000 in European countries). It does not take into account the indirect effects of drug use on health through, for instance, the impact of addiction on the family or lower labor force participation and the subsequent drop in income. It is [therefore] likely that the difference in drug-related mortality between the US and other countries is in fact underestimated. 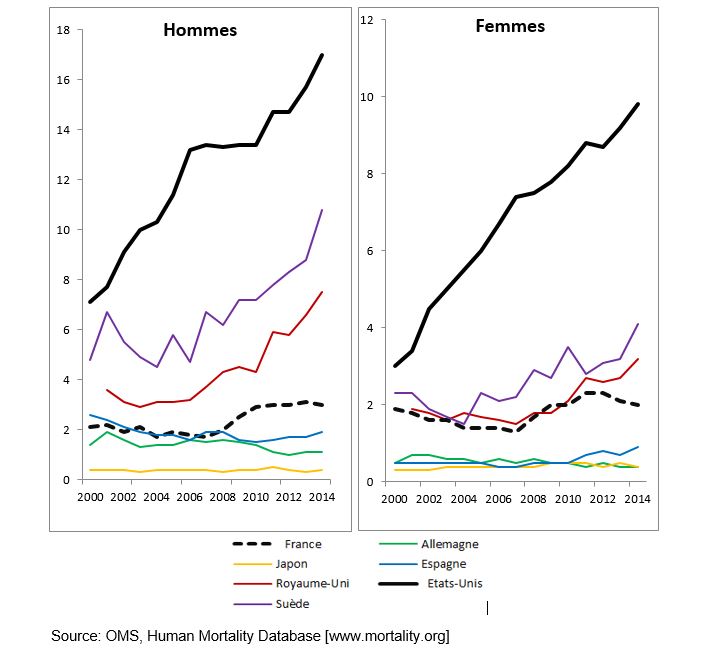 Source: Magali Barbieri, 2018, The contribution of drug-related deaths to the US disadvantage in mortality, International Journal of Epidemiology.