The diverse nature of living apart together (LAT) relationships: an Italy-France comparison

Living without a partner does not necessarily mean not being affectively attached to another person. Approximately one-fourth of persons living alone in Italy and France are engaged in a living apart together (LAT) relationship. In “The diverse nature of living apart together relationships: an Italy-France comparison”, authors Arnaud Régnier-Loilier and Daniele Vignoli analyze the characteristics of people in this situation and their reasons for not living with their partner.

Despite a decline in marriage in Italy, it is still a central event in a couple’s life there: in 2005, only 6% of persons aged 18-49 living with a partner were not married, as against 34% in France. Marriage is no longer the main framework for having children in France, in contrast to Italy: 56% of births in France were outside marriage in 2012, as opposed to 24% in Italy. Only in 2016 did Italy establish an equivalent of France’s 1999 PACS or civil union law, which provides a legal framework for the relationships of unmarried partners.

More young adults live with their parents in Italy than in France, a situation due not only to labor market integration difficulties and more complicated access to residential independence but also to the influence of the matrimonial model, which makes it harder for unmarried partners to move in together.

These contrasting contexts suggest that couples cohabit less often in Italy, but this was not validated. However, the meaning of living apart together differs in the two countries.

The study authors drew on France’s Survey of Family and Intergenerational Relations (ERFI, INED-INSEE, 2005), with its sample of 10,079 women and men aged 18-79, and Italy’s Famiglia e Soggetti Sociali survey (ISTAT, 2009), with its sample of 24,000 households composed of members of all ages (nearly 50,000 persons). Because both surveys were asking the same overall question, it was possible in both to identify people in a LAT relationship.

The article first compares LAT couples to cohabiting partners in order to bring out the specificities of each country; it then focuses on persons living apart together to discover the reasons they do not live together.

Living apart together is very frequent among young people in Italy

The proportion of couples living apart together among persons aged 18-79 is almost the same in Italy and France, 10% and 9% respectively (see Figure). 23% of people living alone in Italy are emotionally attached to someone, while the figure for France is 20%. On the other hand, the proportion of young adults (aged 25-29) in a LAT among all young adults in a romantic relationship or couple in the country is much higher in Italy than in France: 48% versus 13%. Strong family and social pressure to get married explains why cohabitation among unmarried partners is low in Italy; conversely, that situation leads to distance relationships as the only possible alternative to marriage.

Past conjugal history is one factor explaining living alone together relationships: people who have already lived with a partner are more likely to be in a LAT. Occupational situation also plays a role for people under 40: individuals with a limited-term contract are more likely to be in a LAT in both France and Italy. Moreover, for all ages, the propensity not to live together rises as we move up the educational attainment scale. And while religion does not influence whether partners live together in France, it does in Italy: the more often a person practices their religion, the more?less? likely they are to cohabit. 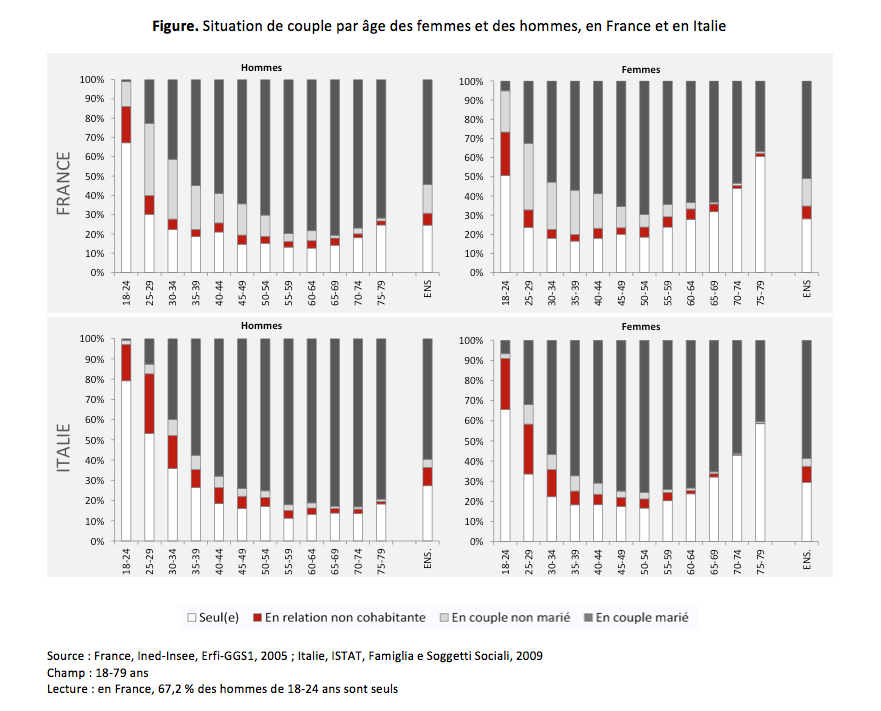 37% of people in France who are not living with their partner report that this is by “choice”, as against 27% in Italy. Moreover, in France, the older a person is, the more likely they are to say they are in the LAT by choice: 26% of persons aged 18-24 say they have chosen not to live with their partner, as against 57% of persons aged 50-54 and 67% of persons aged 70-74. The desire to “remain independent” is cited more often in France than in Italy as a reason for not living with one’s partner (19% versus 10%), whereas Italians more often cite economic “constraints”.

While the prevalence of couples in living apart together relationship is nearly the same in the two countries, the meaning of that finding is quite different for them. In Italy, most such relationships concern young people before they live together or get married; in France, not living together is more often a choice, particularly at later ages, after a separation or a partner’s death.