The article “Prenuptial agreements and matrimonial property regimes in France” describes developments in couples’ regime choices in France over the lengthy period 1855-2010. Authors Nicolas Frémeaux and Marion Leturcq constructed long series using a range of different data sources, series that also enabled them to document the period preceding the 1975 introduction in France of divorce by mutual consent.

When couples marry, they may simply choose to accept the legal “default” regime in France, that is, the one automatically assigned upon marriage. They may also choose to draw up a prenuptial agreement and so to adopt a different marital property regime, or to specify changes to the default one. Prenuptial agreements, which require the services of an attorney, must indicate the marital regime the couple married within, the property each partner owned on the date of marriage, and any specifications the couple wishes to add. Consequently, regime chosen informs us about notions of property and how spouses planned to divide it up during their union, in case of divorce, and upon the death of one of them.

From 1804 to 1965, the marital regime by default was community of all property. In 1965 the system was reformed: the legal property regime became partial community, “reduced” to property acquired since the marriage; the dowry regime was abolished and the principle of spousal equality established. 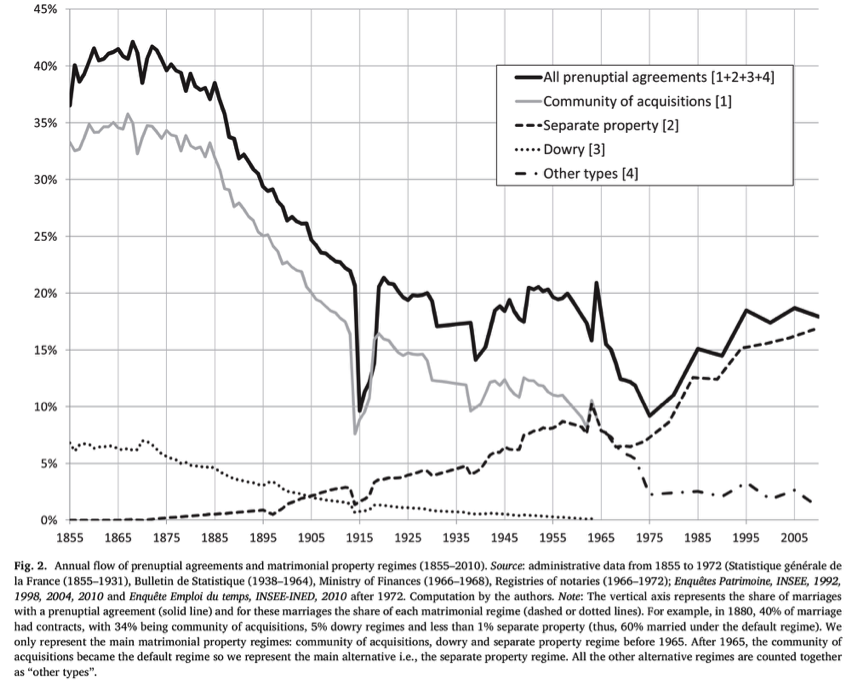 For the period 1856-1965, the data source used was marriage registries; for the period 1966-1972, financial and attorney records; and from 1972 on, surveys such as INSEE’s Household wealth survey and the INSEE-INED Time-use urvey.

Moreover, matrimonial property regime preferences have changed considerably. Before 1965, total community and the dowry regime [in which the wealth the woman brings into the marriage remains inalienable] were most frequent. After that date most couples establishing an agreement opted for total separation. The massive entry of women into the labor force and changes in marriage-related practices (marrying later in life, rise in remarriages gradually leading to individualization of property ownership) may help to explain these developments. Since the 1970s, marriage rates have fallen sharply in France. At that time only 5% of couples were unmarried; the figure has now risen to 25% (including the 4.5% of couples in a civil union).