The survey was headed by INED researchers Cris Beauchemin, Christelle Hamel and Patrick Simon, all members of the Institute’s “International migrations and minorities” research unit.

How did this survey come to be?

On the 20th anniversary of the Marche des Beurs [3 December 1983, a nationwide demonstration against racism and for equality; many of the demonstrators were second-generation immigrants of North African descent, a group popularly referred to as “Beurs”], then Prime Minister Jean-Pierre Raffarin declared, “We need a major survey on immigrants and immigrants’ children in France.” A year later the “Trajectoires et Origines” (TeO) project was born, to be conducted by INED, a public research institute, and INSEE, a department of the finance ministry whose task is to produce statistics for the state. One of the major goals of the survey was to analyse how immigrants and their children become integrated into French society and to identify possible barriers they have to cope with. The survey therefore covers a wide range of subjects: schooling, work life, housing, health, family formation, but also subjects such as feelings of national belonging, political life, and others. The issue of discrimination came to occupy centre stage. It was important for us to distinguish discrimination related to a person’s origin from other sources of discrimination.

Is it true that schooling develops or accentuates differences by origin?

The answer is not the same for immigrant daughters and sons, and education level also has to be taken into account. The proportion of bacheliers (students with a high school leaving degree) among immigrants’ descendants is sharply lower than in the majority population (defined as no immigrants or immigrants’ descendants): 55% versus 62%. But at that education level, the gap is explained primarily by social origin of immigrants’ sons and daughters (specifically, parents’ level of completed education and socio-occupational category). With all other factors controlled for—i.e., comparing persons who are very similar in all respects—differences by origin disappear for boys. And the scholastic performance of immigrants’ daughters is considerably better than that of girls in the majority population. In higher education, origin effects nearly vanish.

However, primary school is a critical moment for immigrants’ sons, who “switch off” in much greater proportions than majority population boys. One third of sons of sub-Saharan African, North African and Turkish immigrants have neither a general high school degree nor a vocational certificate (BEP, CAP), and 20% do not have a middle school certificate. In the majority population the corresponding figures are 17% and 9%. A considerable share of girls of Turkish descent also drop out of the school system. They are an exception among immigrants’ daughters.

What kinds of economic discrimination are observed in France today?

With all other factors controlled for, the descendants of immigrants belonging to visible minorities show considerable underemployment. For example, the employment figures for North African immigrants’ sons and daughters 18-50 years of age are 4 and 5 points lower than for majority population men and women with the same characteristics (same age, educational level, place of residence, etc.). It is also striking that among visible minorities, probabilities of being jobless are often greater for immigrants’ sons than for immigrants themselves. For example, unemployment is higher among sub-Saharan immigrants’ sons (27%) than among sub-Saharan immigrants (15%)—though the men in question were born, raised and schooled in France. The reverse is found for the children of immigrants of European descent: the second generation’s job situation is better than their parents’.

Have French integration policies failed then?

It is important to consider several points in answering that question. Regarding access to socio-economic resources (education, employment, housing, etc.), it is clear that French integration policy is in trouble and that it needs to be bolstered by full-fledged anti-racism and anti-discrimination policies. The objectively measured inequalities that visible minority immigrants and their descendants are subject to operate in all afore-mentioned areas. However, if we look at findings for the socio-cultural sphere, we see that integration is well underway. From one generation to the next, from immigrants to their children, considerable increases are observed in the use of French, mixed unions, and feelings of belonging to the country. In fact, research into the subject of identity reveals a kind of “one-way” integration process in France. Immigrants and their children massively accept and adhere to French identity. But many report feeling that they are not seen or recognized as French. This representation gap attests to a feeling of being rejected that is in turn harmful to social cohesion. In the final analysis, above and beyond discourses on the republican principle of equality, public policy has not been able to overcome inequalities linked to origin, skin colour, and physical appearance, or the exclusion that minorities are subject to in France. French integration policy needs to be thoroughly rethought. Closer contacts between researchers and policymakers would perhaps help further this end. 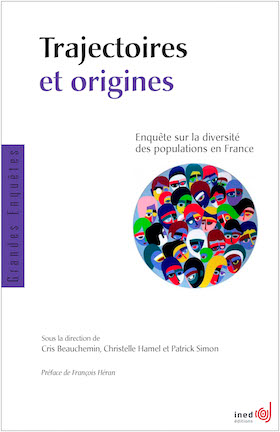