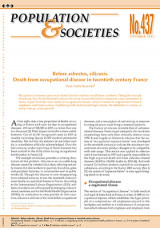 Subscribe to the e-alert
Download
Occupational diseases cause more deaths than the statistics would have us believe. Taking the example of silicosis, Paul-André Rosental explains the many reasons behind this statistical under-estimation. It stems in part from the very notion of occupational disease, which is based on negotiations between  employers and trades unions. Combining both medical and legal criteria, the definition is narrow, so many cases go unrecognized.
At first glance, only a tiny proportion of deaths occurring in France each year - fewer than one in a thousand - can be attributed to occupational diseases. It is acknowledged, however, that the statistics do not reflect reality. For example, in the coal mining industry alone, an estimated 34,000 deaths were officially attributed to silicosis, the most deadly occupational disease of the twentieth century, from 1946 to 1987. But the true figure is probably two to three times higher. This under-estimation has a combination of causes, including non-recognition of the disease, attribution of deaths to other causes, the departure of miners to other sectors and the omission of many cases among immigrants who worked in French mines.