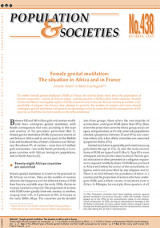 Female genital mutilation: the situation in Africa and in France

Subscribe to the e-alert
Download
To combat female genital mutilation (FGM) in France, we need to know more about the populations of women concerned - mainly of African origin - and the practice of FGM in their home countries. Armelle Andro and Marie Lesclingand explain that the situation varies from one African country to another, independently of religion. For France, they attempt to quantify the number of women who have already undergone genital mutilation and present an upcoming survey to assess the health consequences of this practice so that these women’s needs can be better addressed.
Between 100 and 140 million women worldwide have undergone female genital mutilation (FGM). While most live in sub-Saharan Africa, 5% live in African immigration countries of Europe and North America. In regions where FGM is performed, the situation varies from country to country. In some, Guinea for example, the practise is widespread and 96% of women are concerned, while in others, such as Niger, it is rare (2% of women). The prevalence of FGM is declining in these countries however. An estimated 50,000 women with FGM were living in France in 2004. A survey will be conducted to find out more about the health consequences of these mutilations and to address them more effectively.

Female genital mutilation around the world

Transition to adulthood and gender: changes in rural Mali

When the Population is Changing. A Presentation of Research Findings in Mali.