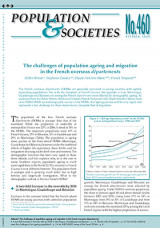 Subscribe to the e-alert
Download
The French overseas départements (DOMs) are generally perceived as young societies with rapidly expanding populations. Yet, with the exception of French Guiana, the opposite is true: Martinique, Guadeloupe and Réunion are among the French départements most affected by demographic ageing. As explained here by Didier Breton, Stéphanie Condon, Franck Temporal and Claude-Valentin Marie, head of an INSEE-INED sociodemographic survey in the DOMs, this ageing process will be very rapid, and represents a key challenge for these départements, alongside that of migration.

The population of the four French overseas départements (DOMs) is younger than that of metropolitan France. In 2006, the under-20s represented 35% of the population in Réunion, 31% in Guadeloupe, 29% in Martinique and 45% in French Guiana, versus just 25% on the mainland. But, paradoxically, their populations are ageing more quickly due to the combined effects of longer life expectancy, fewer births and the emigration of young adults (both men and women). By 2030, the proportion of over-60s is expected to double in Martinique, Guadeloupe and Réunion. In a context of unemployment and job insecurity, living conditions for future retirees may be difficult, and they may receive less family support in old age than today.