Across European Union countries, family migration is by far the first basis for granting resident permits, accounting for nearly 40% of all permits issued in 2018. And yet those figures, centered as they are on destination countries, give an inaccurate picture of family migration. They say nothing about migrants who do not go through administrative family reunification procedures to bring family members to Europe. A study we did in the framework of the Migrations between Africa and Europe or MAFE research program on how families of Congolese, Ghanaian, and Senegalese migrants function has shown that sub-Saharan migrants often opt for transnational lives in which the migrants and their family members decide to live in several locations, with some nuclear family members (spouses, children) living in Europe while the others remain in Africa (Mazzucato et al, 2018).

The data we used in conducting this study are unique in nature as they comprise information collected in both the immigrants’ countries of origin and receiving countries. Relating these bodies of data to each other thus enables researchers to measure the ties that migrants maintain with their countries of origin.

MAFE survey respondents living in Europe were questioned on their family situation, particularly where their spouses and children were living. At the time of the survey, one-third of respondents had neither a life partner nor children (“no nuclear family” in Figure 1). Nuclear family members of the other two-thirds either migrated at the same time as the respondent (“always unified family” in Figure 1), reunited with that family member in Europe (“reunified family”), or were pursuing transnational lives (“transnational family”). The relative proportions of these different family arrangements vary by migrant origin (Figure 1). Transnational configurations were found to be particularly frequent among Senegalese living in Europe: 44% live away from their spouse and/or children, who remained in Senegal. The corresponding figures are 23% of Congolese and 17% of Ghanaians. Furthermore, transnational family configurations differ according to whether a mother, father or both migrate (Caarls et al. 2018). Mothers who migrate alone seem to have the most vulnerable type of family constellation. 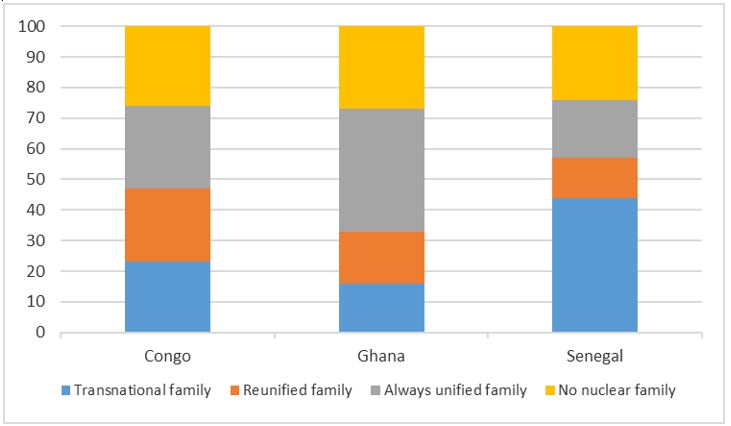 Living on different sides of borders is not only a frequent situation, it is also a lasting one. MAFE surveys show that 23% of married Ghanaian migrants who came to Europe had not been joined by their spouse 10 years after their departure; among Congolese the figure is 39%, and it rises as high as 70% among Senegalese (Figure 2). The proportions for separation between parents and children are similar. Moreover, nationally representative surveys conducted in France (TeO) and Spain (ENI) have shown that sub-Saharan migrants more often belong to transnational families than do migrants of other origins (Eremenko and González-Ferrer 2018).

Figure 2 – Family arrangements of African migrants in Europe 10 years after separation due to their departure for that continent, by country of origin

Being a family long-distance

Even within countries of origin in sub-Saharan Africa, non-cohabitation of members of the same nuclear family can be frequent. In many countries, parents fairly frequently put their children into the care of another relative; this practice is not thought of as abandonment. For some international migrant parents, leaving their children in the home country is a practice consistent with family norms. Transnational family living may also be explained by respondents in economic terms. On the one hand, it is cheaper for migrants to support their families in Africa than in Europe. On the other, extended families may prefer to have spouse and children remain in the country of origin to ensure that their migrant member continues to transfer goods and money to them. In fact, approximately half of Congolese (49%), Ghanaian (56%), and Senegalese (49%) immigrants send money to their family. Migrants who received assistance from their family to make the move are more likely to do so than those who did not.

Family reunification occurs more frequently in Africa than in Europe

Another important finding is that the families of African migrants not only reunify in Europe but also in Africa; that is, when migrants return to, and decide to resettle in, their home countries. For instance, of 100 Ghanaian couples separated by migration to Europe by one of the spouses, 52 were living together again in Ghana 10 years after that separation, and only 25 had been reunited in Europe (Figure 2). Both spousal and parent-child reunification almost always occurs more frequently in Africa than in Europe. This phenomenon is not captured by conventional statistics, which measure immigration flows to receiving countries but not emigration (possibly back) out of them.