tells us about working conditions of airline flight personnel

The sociologist Anne Lambert is a researcher at INED’s Mobility, Housing and Social Networks unit. In 2016 she published Turbulences, a bande dessinée [BD, here an illustrated presentation of an original, representative scenario] based on her field study.

Who are flight personnel? Do they constitute a homogeneous group?

Technical flight personnel (PNT in French) or pilots are legally responsible for the flight and most of them are men; commercial flight personnel (PNC) or flight attendants (stewards and hôtesses) are in charge of in-flight services and passenger safety, and 66% of them are women. These terms have strong symbolic significance: PNCs would prefer greater emphasis on the technical dimension of their jobs (rescue operations, etc.) and less on meal service duties. Pilots, meanwhile, often have themselves called “Captain.”

The uniforms, activities, and standardized language of airline personnel are familiar to us but we know little about their real working conditions and way of life. Obviously, those conditions depend a great deal on the airline company and legal context, which vary considerably. The flight crews I observed were fairly well treated compared to those working for low-cost or Persian Gulf country companies.

These jobs enjoy a very positive image. Do the working conditions justify it?

Pilots who have read my BD tend to say the opposite! They would like me to give greater emphasis to “team solidarity,” especially during accidents. But accidents are a rare occurrence; the BD gives an accurate picture of ordinary working conditions. And the living conditions of these two staff groups are so different that it would be naïve to believe in a kind of team solidarity that transcends corporate or class solidarities. One group work on their feet in the cabin, in view of passengers who are constantly requesting services from them, while the other group, mainly men, remain confined to their seats in the cockpit. Pilots’ salaries are five to ten times those of flight attendants. The two groups are not covered by the same labour accords or duty period regulations. But it’s important not to exaggerate. There are also fine internal hierarchies among PNCs (from young steward to experienced cabin services director) and PNTs. And there are pilot-flight attendant couples.

Friendships develop on board and at stopovers despite the fact that flight crews rotate after each flight. These factors—in addition to being so often far from home and jetlag—explain the empathy personnel feel for each other and the idealized image of the job.

The first publication based on this survey is a bande dessinée. Why that choice?

It was actually more a combination of circumstances than a reasoned choice. I had been engaged on the survey at the airline company for several months when I received a proposal to work with Casterman [a major bande dessinée publisher]. Making research findings accessible and reaching out to a wider audience instead of remaining within the bounds of academia are important aspects of the research profession. I agree entirely with Durkheim’s affirmation that sociology researches “would not be worth one hour of trouble if they had no other interest than a merely speculative one” (1895). 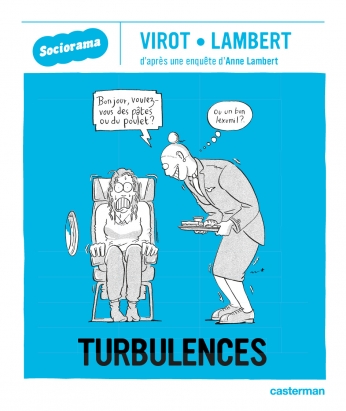