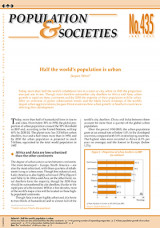 Half the world’s population is urban

Subscribe to the e-alert
Download
Today, more than half the world’s inhabitants live in a town or city, while in 1900 the proportion was just one in ten. Though rural dwellers outnumber city dwellers in Africa and Asia, urban growth is rapid on these continents and by 2030 the majority of their population will be urban. After an overview of global urbanization trends and the likely future rankings of the world’s largest urban agglomerations, Jacques Véron examines how urban growth in Southern countries is affecting their development.

Half of the world’s inhabitants (3.3 billion people) now live in towns and cities. And most of the world’s urban dwellers live in developing countries, where populations are largest. Indeed, one in two live in Asia, home to two-thirds of humankind. Over the last fifty years, urban populations have been growing much faster in poorer countries than in the richest ones (4.3% per year on average in Africa, 1.2% in Europe), and 15 of the world’s 20 largest cities are in developing countries. While urbanization is historically a driver of economic and social progress, the rapid urban expansion in Southern countries, and the housing, employment and transport problems associated with this growth appear to be holding back their development.

Can environmental migrations be measured?

Prospects of population decline in Japan

Gender discriminations at early stages of life in Asia.

2011 Census of India: a population increase of 181 million in the last ten years

The Demography of South Asia from the 1950s to the 2000s. A Summary of Changes and a Statistical Assessment