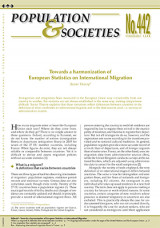 Towards a harmonization of European Statistics on International Migration

Subscribe to the e-alert
Download
Download
Immigration and emigration flows measured in the European Union vary considerably from one country to another. But statistics are not always established in the same way, making comparisons difficult. Xavier Thierry explains that these variations reflect differences between countries in the definition of what constitutes an international migrant, and in the data sources used, i.e. surveys or administrative records.

The immigration and emigration statistics of the different European Union countries are difficult to compare. Each has its own definition of an international migrant, sometimes including asylum seekers and students, for example, and sometimes not. The minimum length of stay also varies, ranging for just a few days in Germany and Spain to one year in the United Kingdom and Sweden. The data sources differ likewise. Countries with population registers rely mainly on this source, while those with no register make use of other tools, such as border surveys in the United Kingdom, administrative records of medical examinations or of residence permits in France. To improve the comparability of statistics, the European Union has issued a regulation recommending that countries count all migrants whose length of stay is at least one year, whatever their reason for admission.

Accidental and violent injuries: Less frequent among the older population, but more serious