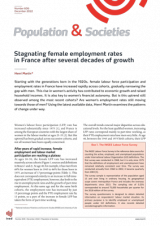 Starting with the generations born in the 1920s, female labour force participation and employment rates in France have increased rapidly across cohorts, gradually narrowing the gap with men. This rise in women’s activity has contributed to economic growth and raised household incomes. It is also key to women’s financial autonomy. But is this uptrend still observed among the most recent cohorts? Are women’s employment rates still moving towards those of men? Using the latest available data, Henri Martin examines the patterns of change under way.

Women’s labour force participation (LFP) rate has increased substantially since 1975 [1], and France is among the European countries with the largest share of women in the labour market at ages 25–55 [2]. But this uptrend has been gradual across successive cohorts, and not all women have been equally concerned.

1.1. After years of rapid increase, female employment and labour market participation are reaching a plateau

At ages 30–50, the female LFP rate has increased massively across cohorts (Figure 1; sources and definitions in Boxes 1 and 2). At age 40, for example, it has risen from 69% for women born in 1945 to 86% for those born in 1975, an increase of 17 percentage points (Table 1). This does not correspond entirely to an increase in full-time-equivalent (FTE) employment, however, due both to the rise in unemployment rates and the growth of part-time employment. At this same age and for the same birth cohorts, the employment rate has increased by just 15 percentage points and the FTE employment rate by 13 points, so a part of the increase in female LFP has taken the form of part-time working.

The overall trends conceal major disparities across educational levels. For the least qualified women, increasing LFP rates correspond mainly to part-time working, as their FTE employment rates have risen very little. At age 40, between the 1945 and 1975 birth cohorts, their LFP rate increased by 10.4 percentage points, while their FTE employment rate grew by just 4.6 points (Table 1). For the most highly qualified women, on the other hand, these rates at age 40 increased by 13 and 15 points, indicating that the increase in LFP rates corresponds almost entirely to full-time working. Moreover, their FTE employment rate has increased faster than their LFP rate (15 points vs. 13 points), reflecting lower levels of part-time working.

The latest available data show that this increase in female LFP is reaching a plateau. For women born after 1970, LFP and employment rates are no longer increasing across cohorts.

1.2. A gradual downtrend in male LFP and employment over recent decades

The gender gaps in LFP and employment rates have decreased across all cohorts (Figure 1). However, while they narrowed very quickly for the cohorts born between 1925 and 1970, progress has slowed markedly for more recent cohorts. For those born before 1970, this convergence between men and women was due mainly to higher female LFP and employment rates, but it is now entirely attributable to declining rates among men.

1.4. A large increase in LFP and employment for both sexes around age 60

Following regulatory changes in the pension system and the labour market—introduction of early retirement and phased retirement schemes, exemption from seeking employment for the oldest unemployed workers, lowering of retirement age to 60 years, etc.—male LFP and employment rates fell sharply at ages close to 60 years across the cohorts born between 1925 and 1940 (Figure 1) [4]. For women, these changes were counterbalanced by growing LFP, resulting in a stabilization of LFP rates at the same ages and for the same birth cohorts. A complete trend reversal has been observed for the cohorts born after 1940, however, with the gradual phasing out of early retirement schemes and the abolition of phased retirement in 2005 and of the job-
seeking exemption in 2012. These cohorts have also been affected by various reforms of the pension system. These include a lengthening of the contribution period for entitlement to a full pension (reforms of 1993 and 2003), and an increase from 60 to 62 years in the legal retirement age (reform of 2010) and from 65 to 67 years for automatic entitlement to a full pension. Consequently, between the women born in 1925 and those born in 1955, the LFP rate at age 59 increased by 33 percentage points, and by 14 points for men. Employment rates similarly increased, reflecting the success of these reforms in prolonging workers’ presence on the labour market.

The increase in female labour market participation over recent decades has been widely studied and documented. So, what can we learn from these new data? First, this uptrend is levelling off at central working ages (30–55 years). Second, the existing trend of a slow decrease in male labour force participation is continuing, and it is now the main factor behind the narrowing gap between male and female LFP and employment rates. Finally, these data reveal a sharp increase in LFP, but also in employment, among people reaching retirement age. This observation, which applies to men and women alike, is explained both by the gradual withdrawal of early retirement schemes and by the reforms of the pension system.

The INSEE Labour Force Survey is the reference data source for counting the active, employed, and unemployed populations under International Labour Organization (ILO) definitions. The first survey was conducted in 1968, but it is only since 1975 that the definitions of employment and unemployment have remained relatively consistent over time. The survey was conducted annually from 1968 to 2002; it became quarterly from 2003 [5].

The survey sample is representative of the population aged 15 and over living in ordinary housing. Its geographical scope covers metropolitan France and includes the overseas departments since 2013. The sampling rate of 0.25% corresponded to around 75,000 households per quarter for the 2018 edition of the survey.

The survey questionnaire is designed to obtain detailed information on respondents’ labour market situation. Its primary purpose is to identify employed or unemployed people under ILO definitions. It also records detailed sociodemographic information.

This study focuses on the cohorts born between 1925 and 1985. It excludes people still in initial education at the time of the survey (their number is very small after age 30, although their proportion is increasing across cohorts). Its geographical scope is limited to metropolitan France (mainland France and Corsica) as the overseas departments were not included in the survey until 2013. These methodological choices explain why the calculated data series differ from those published by INSEE.

To expand the analysis, four quartiles were defined for each birth cohort by educational level: the 25% most highly qualified, the 25% with a higher-intermediate qualification, the 25% with a lower-intermediate qualification, and the 25% least qualified. To take account of the general increase in educational levels across cohorts when constructing these quartiles, the members of each cohort were ordered first by level of qualification, then by their age at completing education. The results here are only analysed for the 25% most highly qualified and the 25% least qualified, the two other groups being in intermediate situations.

For more information on the method used, see [6].