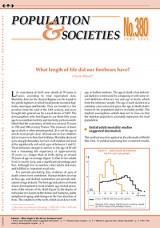 What length of life did our forebears have ?

Life expectancy at birth now stands at 79 years in France, according to vital registration data. Mortality data for the Ancien Régime can be found in the parish registers in which local priests recorded baptisms, marriages and burials. They are found in a few parishes from the end of the 15th century, and were brought into general use by a royal decree of 1667. The demographers who first began to use them fifty years ago to reconstitute fertility and mortality patterns established that life expectancy at birth was around 25 years in 17th and 18th century France. This measure of mean age at death is often misinterpreted: 25 is not the age at which most people died. At least one in four children did not survive to their first birthday. Mortality declined quite sharply thereafter, but half of all children still died at the significantly sub-adult ages of between 1 and 11. Those fortunate enough to survive to the age of 20 still had a remaining life expectancy of approximately 35 years, i.e., longer than at birth, dying at around 55 years of age on average (figure 1). One in two adults lived to nearly sixty, and a significant percentage past that. Although few in number, older adults did exist, and fulfilled an important social role.