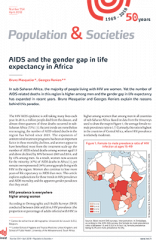 AIDS and the gender gap in life expectancy in Africa

In sub-Saharan Africa, the majority of people living with HIV are women. Yet the number of AIDS-related deaths in this region is higher among men and the gender gap in life expectancy has expanded in recent years. Bruno Masquelier and Georges Reniers explain the reasons behind this paradox.

In sub-Saharan Africa, women account for 59% of people infected with HIV, but only 47% of HIV-related adult deaths. To understand why women are overrepresented in the HIV-infected population, differences between men and women must be considered in terms of exposure to infected partners, susceptibility to infection per coital act, and survival after infection. The female life expectancy advantage, which contracted as the AIDS epidemic spread, is now increasing again since the roll-out of antiretroviral treatments. The burden of HIV mortality in terms of the per capita life-years years lost to HIV remains, however, larger for women than for men.

Mortality between ages 5 and 15

Mortality Inequalities and Trends in Low- and Middle-Income Countries, 1990-2015