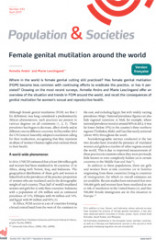 Female genital mutilation around the world

Where in the world is female genital cutting still practiced? Has female genital mutilation (FGM) become less common with continuing efforts to eradicate the practice, or has it persisted? Drawing on the most recent surveys, Armelle Andro and Marie Lesclingand offer an overview of the situation and trends in FGM around the world, and recall the consequences of genital mutilation for women’s sexual and reproductive health.

In 2016, UNICEF estimated that at least 200 million girls and women had experienced genital mutilation in 30 countries: 27 in Africa, along with Yemen, Iraq, and Indonesia. Migration currents have carried these practices to other continents. While they are decreasing in the countries where they are least prevalent, no change has been observed in those where they are highly frequent, although the proportion of persons who support their continuation is falling. Under the pretext that it reduces the health risks of the procedure, some health professionals have begun to perform genital mutilation, although this is firmly condemned by the WHO and other international organizations.

Female genital mutilation: the situation in Africa and in France

Transition to adulthood and gender: changes in rural Mali

When the Population is Changing. A Presentation of Research Findings in Mali.