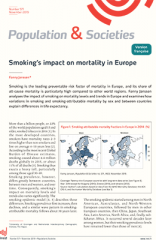 The influence of tobacco on mortality in Europe

Smoking is the leading preventable risk factor of mortality in Europe, and its share of all-cause mortality is particularly high compared to other world regions. Fanny Janssen analyses the impact of smoking on mortality levels and trends in Europe and examines how variations in smoking and smoking-attributable mortality by sex and between countries explain differences in life expectancy.

In Europe, the smoking epidemic has clearly affected mortality levels and trends, as well as differences therein between countries and sexes. In 2014, smoking reduced the life expectancy levels of European countries on average by 2.7 years among men and by 1.0 years among women, and smoking contributed 28% to the sex difference in life expectancy. The smoking epidemic is most advanced in North-Western Europe, where smoking-attributable mortality is abating among men but still nearing its peak among women, resulting in small differences between both sexes. If we eliminate smoking-related mortality, life expectancy would not have stagnated in countries like Denmark and the Netherlands in the 1950s and 1960s among men and in the 1980s and 1990s among women. Generally, without smoking, life expectancy would have increased more strongly and in a more similar manner among men and women.