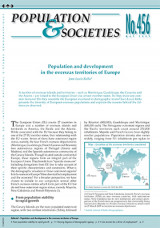 Population and development in the overseas territories of Europe

Subscribe to the e-alert
Download
A number of overseas islands and territories - such as Martinique, Guadeloupe, the Canaries and the Azores - are linked to the European Union via certain member states. Do they share any common features? Do they resemble the European mainland in demographic terms? Jean-Louis Rallu presents the diversity of European overseas populations and explains the reasons behind the differences observed.
The outermost regions of the European Union have con-trasting demographic situations. Although fertility is low in the Atlantic outermost regions (1.2 children per woman on average in the Canaries) and in Martinique (1.9), and the rate of natural increase similar to that of the mainland countries to which they belong (around 3 per 1,000), French Guiana and Mayotte still have high fertility levels and a young population (35% and 44% of their inhabitants, respectively, are under 15), as do New Caledonia (28%) and French Polynesia (26%). In the Canaries, large-scale immigration more than offsets low fertility, resulting in sustained population growth (+23 per 1,000). In French Guiana and Mayotte, immigration and fertility are both high, and their populations are growing rapidly (+37 per 1,000 and +31 per 1,000, respectively). Employment rates are much higher in the Atlantic outermost regions (60%) than in the French overseas départements (40%). Regional integration, extending beyond tourism, is now a major challenge for the development of these overseas regions.