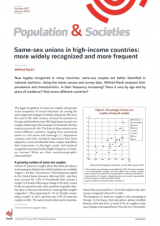 Now legally recognized in many countries, same-sex couples are better identified in national statistics. Using the latest census and survey data, Wilfred Rault analyses their prevalence and characteristics. Is their frequency increasing? Does it vary by age and by place of residence? And across different countries?

The legal recognition of same-sex couples and greater social acceptance of sexual minorities are among the most important changes in family and private life since the end of the 20th century. Around 50 countries in Europe and elsewhere now offer legal status to same-sex couples, following in the footsteps of Denmark, the first country to do so in 1989. The form of these unions varies across different countries, ranging from consensual union to civil union and marriage [1]. Population censuses and other statistical operations have been adapted to count and describe these couples and follow their trajectories. Is this legal, social, and statistical recognition associated with a higher frequency of same-sex unions? What are their sociodemographic characteristics?

1.1. A growing number of same-sex couples

Counts of same-sex couples show that their prevalence is increasing in all places for which statistics are available (Figure 1; see Box 1 for sources). Their frequency tripled in the United States between 2000 and 2021, and they now account for 1.8% of households that contain a couple. In Canada, following a change in the 2021 census to the sex question and a new question on gender identity (Box 2), they are referred to as ‘same-gender couples (cisgender)’. They represented 1.1% of ‘families containing a couple’ in 2021, up from just 0.5% of same-sex couples in 2001. The same trend is observed in Australia, where they accounted for 1.4% of all couples in the 2021 census compared with 0.3% in 2001.

Most counts obtained via census data have a major limitation, however, as they are based on household composition and do not take account of non-cohabiting relationships, more frequent among same-sex couples. In France, for example, the 2011 survey on family and housing revealed that non-cohabiting couples are 4 to 5 times more frequent among same-sex couples than among different-sex couples [2].

At older ages, a higher proportion of same-sex couples than different-sex couples are in a PACS civil partnership (pacte civil de solidarité), the first type of union opened to same-sex couples in France (in 1999). Among same-sex couples, before age 50, women are more frequently married than men, while men are more often in a PACS union. This reflects the differences in their family situations; women more often have children in the household than men (see below). The decision to marry may be linked to parenthood or plans to have a child; but marriage, contrary to PACS and consensual unions, also entitles couples to adopt, notably for lesbian couples with a child conceived through insemination where only one of the two mothers is legally recognized at its birth [3].

Same-sex couples less frequently live with children than different-sex couples, men especially, although the trend is upward. In Australia, a quarter (25%) of households containing a lesbian couple also included at least one child (of any age) in 2016, and 38% in 2021. For men the proportion rose from 4% to 7%.

In Canada, in 2016, 12% of same-sex couples had children (of any age) in the household versus 51% of different-sex couples. By 2021, the percentage had almost doubled (23%), again with large disparities between lesbian and gay couples: 33% of the former were living with children, and 11% of the latter (compared with 50% among different-sex couples).

Sexual minorities have long been attracted to cities with a wide choice of places to meet and socialize, where they can remain anonymous and more easily express an often stigmatized and repressed sexuality. Women and men in same-sex couples much more often live in large urban centres than different-sex couples. In the 2016 census, 46% of Canadian same-sex couples lived in one of the country’s three largest metropolitan areas (Toronto, Montreal, and Vancouver) compared with 33% of different-sex couples. In 2021, this concentration was less pronounced (42% vs. 34%).

In the United States, a large share of same-sex couples live in the country’s western states and in those with large cities (New York state, Washington DC, Massachussetts, Florida, California).While representing just 1.5% of households containing a couple across the United States in 2019, the percentage of same-sex couples is much higher in certain urban areas such as San Francisco (2.8%), Portland (2.6%), Seattle (2.4%), and Orlando (2.4%).

In Germany, the proportion of same-sex couples is 2.5 times higher in municipalities with populations of more than 500,000 than in the country overall (2019). In Spain, the percentage of same-sex couples is high in Madrid, Catalonia, and the Valencian Community. Alongside these three highly urbanized zones, proportions are also high in the Balearics and Canary Islands, provinces with a large tourism industry [4]. These regions include holiday resorts that are popular with sexual minorities, who are also slightly more likely to work in jobs linked to tourism, such as hotels and catering [5].

In France, in 2020, the proportion of same-sex couples in the Paris region and the city of Paris was higher than in the rest of France. While 2.6% of men and women in different-sex couples live in Paris and 14.6% in the Paris region, the respective percentages are 15.8% and 30% for gay couples and 6.1% and 18.4% for lesbian couples. Lesbian couples are less concentrated in Paris and more evenly distributed across the country than gay couples (Figure 3). Same-sex couples are more frequent in French départements with large cities, such as Loire-Atlantique, Gironde, Rhône, Haute-Garonne, Hérault, and Bouches-du-Rhône.

Growing social acceptance and visibility, but also the development of social interaction via the Internet, may be acting in favour of a relative deconcentration; the percentage of same-sex couples living in Paris was lower in 2020 than in 2011. In this respect, the characteristics of different-sex and same-sex couples are becoming increasingly similar.

Sociodemographic surveys and censuses have recorded a substantial increase in the number of same-sex couples. This is probably because they are more systematically reported by the partners themselves and are now easier to observe thanks to improvements in statistical tools, but also because these types of relationships are now more socially accepted. Despite a growing similarity between same-sex and different-sex couples, they still have many distinctive characteristics. Their individual experiences are different, not only because the process of ‘normalization’ of sexual minorities is far from complete [6], but also because same-sex couples are not formed in quite the same way as different-sex couples.

The statistics presented here are drawn from censuses or surveys conducted by national statistical offices: Australian Bureau of Statistics, Statistics Canada, Instituto Nacional de Estadística (Spain), United States Census Bureau (census and American Community Survey 2019), and Statistisches Bundesamt in Germany. For the United Kingdom, the data are drawn from the Labour Force Survey of the Office for National Statistics. Data for metropolitan France come from the Famille et logements survey (INSEE, 2011) and the 2019 and 2020 annual census surveys (INSEE, 2020)*. French census or associated data before 2011 are unreliable due to sex coding errors that produced ‘false’ same-sex couples. While rare, these errors led to miscounts of same-sex couples, whose numbers were very small at the time. The 2011 Famille et logements survey was designed specifically to eliminate this problem. More recently, the census questions have also been revised to ensure accurate enumeration of cohabiting couples.

Two changes were made to the Canadian census in 2021. The words at birth were added to the question on sex, and a new question on gender identity was added:

• What was this person’s sex at birth? Sex refers to sex assigned at birth.

This approach provides a means to identify three individual statuses, depending on whether reported gender is different from or the same (cisgender) as the sex assigned at birth

• different-gender couples (cisgender) with a cisgender man and cisgender woman (98.5% of all couples)

Are Heterosexual Couples in Civil Partnerships Different from Married Couples?