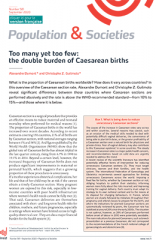 Too many yet too few: the double burden of Caesarean births

What is the proportion of Caesarean births worldwide? How does it vary across countries? In this overview of the Caesarean section rate, Alexandre Dumont and Christophe Z. Guilmoto reveal significant differences between those countries where Caesarean sections are performed abusively and the rate is above the WHO-recommended standard—from 10% to 15%—and those where it is below.