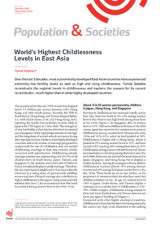 In recent decades, most economically developed East Asian countries have experienced extremely low fertility levels as well as high and rising childlessness. In Japan, Hong Kong, and Singapore, about 3 out of 10 women born in the mid-1970s remain permanently childless.

This phenomenon is closely associated with the decline in marriage and the rise of lifetime singlehood, and with more married women remaining without children. Among women born in the 1960s and 1970s, rising childlessness accounts for about two-thirds of cohort fertility decline in Japan, Hong Kong, and South Korea. Future childlessness trends will also depend on the way East Asian societies adapt to the ‘gender revolution’ and changing family patterns.

Key factors include greater gender equality, a greater focus on well-being among children and families, better economic prospects for young adults, and labour market reform to ensure women no longer have to choose between career and motherhood.

Over the last 3 decades, most economically developed East Asian countries have experienced extremely low fertility levels as well as high and rising childlessness. Tomáš Sobotka reconstructs the regional trends in childlessness and explains the reasons for its current record levels—much higher than in other highly developed countries.

The period total fertility rate (TFR) in East Asia dropped below 1.5 children per woman between 1985 (Hong Kong) and 2000 (South Korea). Recently, the TFR in South Korea, Hong Kong, and Taiwan dropped below 1.0, with South Korea (0.84) and Hong Kong (0.87) reporting the world’s lowest fertility in 2020. Only in Japan is the TFR higher, at 1.36 in 2020. The emergence of very low fertility in East Asia has often been interpreted as a consequence of the rapid postponement of marriage and the rising share of women who do not marry during their reproductive lives. Unlike in other highly developed countries, where the erosion of marriage progressed in tandem with the rise of cohabitation and non-marital childbearing, marriage in East Asia remains closely connected with reproduction. Childbearing outside marriage remains rare, representing only 2%–4% of all children born in South Korea, Japan, Taiwan, and Singapore [1]. By contrast, more than 60% of births in France nowadays take place outside marriage. Therefore, the rise in permanent singlehood in East Asia is directly mirrored in a rising share of permanently childless women and men. Delayed marriage also contributes to higher childlessness in the region. Using census and vital statistics data (Box  1), let us reconstruct how this trend has evolved among women born in the 1950s–1970s.

Data and estimates are derived from the Human Fertility Database (www.humanfertility.org), censuses, and national surveys. Detailed information on sources and methods are available as a supplementary appendix.

1.1. About 3 in 10 women permanently childless in Japan, Hong Kong, and Singapore

Childlessness among women in South Korea and Taiwan increased later, accelerating among those born since the mid-1960s. It has not yet reached the levels observed in Japan, Singapore, and Hong Kong, but it displays a similar dynamic. Among the youngest cohorts, lifetime childlessness reached almost 19% among Korean women and 23% among Taiwanese women born in the late 1970s. These levels are set to rise further, as the proportion of women in their 30s who have never had children continues to rise. At age 35, women born in 1983 in Japan, South Korea, and Taiwan display a convergence to a similar level of childlessness at 37%–39%. Unlike in Japan, childlessness among women in their mid-30s in South Korea and Taiwan does not yet show any signs of levelling off (Figure 1).

1.2. Childlessness also on the rise among married women

A long-term rise in lifetime singlehood is closely linked with childlessness in East Asia. In Singapore, 15% of women born in the early 1970s stayed single at ages 45–49. Singlehood is rising especially fast in South Korea and Taiwan and is projected to reach 20% in the former and almost 30% in the latter among women born in the early 1980s [2]. While a tight link between marriage and reproduction has been preserved in the region, the imperative of having children soon after marriage appears to be weakening. In the past, childlessness among married couples was marginal, probably close to the level of long-term biological infertility (sterility). In Japan, childlessness among married women born in the late 1920s to the 1950s hovered around 3%–4%. However, childlessness among married Japanese women born since the 1960s has increased continuously, with 1 in 10 married women born in 1965–1970 remaining permanently childless. This trend is even more striking in Singapore, where the share of ever-married childless women jumped from a low of 3% among those born in the early 1940s to 14% among those born in the late 1970s. Couples are also taking longer to conceive a child after their wedding. In Japan, the mean interval between marriage and first birth went up from 1.6 years in 1985 to 2.5 years in 2019. Childlessness within marriage therefore contributes to the overall increase in permanent childlessness. Survey data show that most married childless couples in Japan worry about infertility, and almost 3 in 10 have undergone medical treatment or examination for infertility.

1.3. The contribution of childlessness to low and declining cohort fertility

High and rising levels of childlessness among women in East Asia imply that childlessness has become an important component of ‘ultra-low’ fertility in the region. In East Asia, the gap between cohort fertility of mothers and all women is larger than in most other highly developed countries, and it has widened over time. Mothers born in the 1970s in Japan, Singapore, South Korea, and Taiwan have close to 2.0 children on average (Figure 3). Mothers in Hong Kong have on average fewer children (1.8), but most are still adhering to a two-child family norm. However, high childlessness rates, especially in Hong Kong, Japan, and Singapore, mean that women in East Asia born in the late 1970s reach very low completed fertility rates at 1.4–1.5 children per woman (and even lower, below 1.3, in Hong Kong). Among women born between 1960 and the mid-1970s, rising childlessness has accounted for a substantial share of the cohort fertility decline in the region, pushing the completed fertility down by 0.2–0.3 births per woman.

East Asian countries have become global ‘hotspots’ of high childlessness, with 4 out of 10 women remaining childless into their later reproductive ages (around age 35). China follows a similar trajectory of marriage and parenthood postponement, rising permanent singlehood, and rising lifetime childlessness, lagging behind the East Asian societies analysed here by about 2 decades.

What factors explain the steep rise in permanent childlessness in East Asia and Singapore? First, the rapid expansion of university education among women has fuelled the shift to later marriage and parenthood. It has also greatly numerically boosted the group of highly educated women, who were historically the most likely to remain unmarried and childless [1, 3]. In Japan, South Korea, and Taiwan, 60%–80% of women in their late 20s have graduated from university. Secondly, economic uncertainty has increased across the region, especially among younger men [4], regarding unaffordable housing and the spread of temporary, low-paid, and irregular jobs. These trends have negatively affected marriage and family formation. Thirdly, as women gained access to higher education and better career prospects, East Asian countries have remained stuck in an ‘incomplete gender revolution’ despite a vast expansion of family policies by the governments. Societal norms continue to put high pressure on women, especially mothers, regarding their expected household work duties and responsibilities, child-rearing, and care for older relatives and in-laws. Consequently, the gender division of childcare and household tasks remains unequal, with men contributing little time [3]. With rigid work schedules, notoriously long working hours, and widespread discrimination towards mothers on the labour market, women often face stark choices between their family life and career [5]. Finally, contending with all the new pressures and changing lifestyles, younger generations of women and men increasingly have more differentiated attitudes towards marriage and parenthood. A higher share of young adults agree that marriage is not a precondition for happiness and satisfaction in life, and a rising share of women of reproductive age have negative or ambivalent marriage intentions. Many women will eventually ‘drift’ into lifelong singlehood [6]. As reproduction in East Asia continues to be tightly linked to marriage, a rise in lifelong singlehood directly translates into higher permanent childlessness.

While the rise in childlessness in East Asia is often seen as a direct consequence of delayed marriage and non-marriage, the relationship between marriage and childbearing decisions is complex. Childlessness does not necessarily mean non-marriage: an increase in childlessness among married couples is an important yet often neglected driver of the overall rise in childlessness. In addition, the causality between marriage and parenthood runs in both directions. Women and men may avoid marriage because they do not (yet) plan to have children. More broadly, many people in their 20s and 30s may avoid the whole ‘marriage package’ with its gendered expectations, pressures, and obligations towards children, family, and kin, which puts an especially heavy burden on women [3, 7]. The context of relationships has changed, and the expectations concerning prospective partners have shifted. Over time, remaining single has become less stigmatized as the numbers of single women and men have soared.

Permanent childlessness among women in Hong Kong peaked and then started to fall, while childlessness in Japan has levelled off, showing tentative signs of a gradual decline. Are childlessness levels in Singapore, South Korea, and Taiwan likely to peak soon as well?

Discussions on marriage trends in the region often highlight education differentials in partner choice and marriage. In Japan, the initially negative educational gradient in first marriages has reversed, partly driven by the rising first marriage rate among highly educated women [4]. Similarly, in Singapore, the share of singles among women aged 40–49 with a university degree peaked around the turn of the century. If family formation undergoes a similar shift, childlessness may eventually start declining, as most young adults today have a university degree.

However, such a reversal would also depend on childlessness trends within marriage and on the ability of women, having postponed their family formation into their mid- or late 30s or even early 40s, to carry out their fertility plans later in life. Getting married no longer implies having a child, and fewer couples ‘rush’ to have their first child soon after their wedding. Access to infertility treatments might therefore determine whether parenthood plans are achieved. More broadly, future childlessness trends will also depend on the way East Asian societies adapt to the ‘gender revolution’ and changing family patterns. Key factors include greater gender equality, a greater focus on well-being among children and families, better economic prospects for young adults, and labour market reform to ensure women no longer have to choose between career and motherhood.

In recent decades, most economically developed East Asian countries have experienced extremely low fertility levels as well as high and rising childlessness. In Japan, Hong Kong, and Singapore, about 3 out of 10 women born in the mid-1970s remain permanently childless.

This phenomenon is closely associated with the decline in marriage and the rise of lifetime singlehood, and with more married women remaining without children. Among women born in the 1960s and 1970s, rising childlessness accounts for about two-thirds of cohort fertility decline in Japan, Hong Kong, and South Korea. Future childlessness trends will also depend on the way East Asian societies adapt to the ‘gender revolution’ and changing family patterns.

Key factors include greater gender equality, a greater focus on well-being among children and families, better economic prospects for young adults, and labour market reform to ensure women no longer have to choose between career and motherhood.

Has childlessness peaked in Europe?