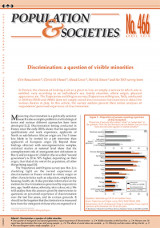 In France, the chances of finding a job or a place to live, or simply a service to which one is entitled, vary according to an individual’s sex, family situation, ethnic origin, physical appearance, etc. The Trajectories and Origins survey (Trajectoires et Origines, TeO), conducted in 2008 by INED and INSEE does not simply record discrimination but examines in detail the various factors at play. In this article, the survey authors present their initial analyses of respondents’ perceived experience of discrimination.

According to the Trajectories and Origins survey (Trajectoires et Origines, TeO), slightly less than 14% of persons aged 18-50 living in France report experience of discrimination over the last five years, for whatever reason (sex, ethnic origin, sexual orientation, age, religion or health status). Among French people who are neither immigrants nor second generations, 10% report discrimination, versus 24% of second generations and 26% of immigrants. The reasons given are primarily ethnic origin (or nationality) and skin colour (57% and 17%), followed by sex and age. Women over 35 report less discrimination than men and young people. While being in employment protects against a sense of being discriminated against, the perception of unfair treatment increases with educational level. Highly qualified immigrants and second generations feel confronted by a "glass ceiling" that prevents access to senior positions. However, only 13% of persons reporting experience of discrimination lodged a complaint with the police, an association, a trade union or the French anti-discrimination authority (Halde).

How do immigrants name their children in France?

Fewer forced marriages among immigrant women and daughters of immigrants

How should the diverse origins of people living in France be described?