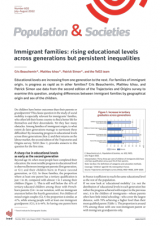 While children born to immigrants in France are more qualified than their parents, their educational levels are nonetheless below those of children with French native-born parents. In families of Asian and sub-Saharan African origin, the parents more often have a tertiary qualification than French-born parents. In families from Turkey and the Middle East, on the other hand, the parents’ educational level is low, and the progress of their children is limited, making this group the least qualified of all immigrant-origin groups. It is well known that girls outperform boys at school in France. This is also true for the daughters of immigrants, who achieve a higher educational level than their parents more frequently than sons do.

Educational levels are increasing from one generation to the next. For families of immigrant origin, is progress as rapid as in other families? Cris Beauchemin, Mathieu Ichou, and Patrick Simon use data from the second edition of the Trajectories and Origins survey to examine this question, analysing differences between immigrant families by geographical origin and sex of the children.

Do children have better outcomes than their parents or grandparents? This classic question in the study of social mobility is especially relevant for immigrants’ families, who often left their home country to find a better life for themselves and their descendants. Yet they face many obstacles. Among families of immigrant origin, to what extent do later generations manage to surmount these difficulties? By measuring progress in educational levels across three generations (Box 2) and their returns on the labour market, the second edition of the Trajectories and Origins survey, TeO2 (Box 1), provides answers to this question for the first time.

1.1. Box 1. Trajectories and Origins (TeO), a survey on the diversity of populations in France

The TeO2 survey covers individuals aged 18–59 living in an ordinary household in metropolitan France. Around 27,200 people were surveyed to gather detailed information on the main population groups with direct or indirect experience of migration to metropolitan France. For this reason, immigrants and people from the French overseas departments and regions, and their children born in metropolitan France, are over-represented. The sample also includes individuals representative of the rest of the population. Among this group, TeO2 can now identify the grandchildren of immigrants, an innovation with respect to TeO1, which already identified repatriates from former French colonies and their descendants. Alongside the main TeO2 survey sample, an experimental survey was conducted to increase the number of grandchildren of non-European immigrants (complementary survey not used in this article).

The TeO2 questionnaire explores the migration history of respondents and/or their parents, describes their educational and occupational trajectories, family history, unions, children, housing conditions, health, and the transmission of languages and religion. It examines individuals’ access to a range of social resources (education, employment, housing, services, healthcare, etc.) and the discrimination they may experience in these areas.

The sociology of immigration commonly uses the notion of generation to classify individuals according to their family’s migration history.

The rest of the population includes French-born people who may have immigrant ancestors among their great-grandparents or beyond. They belong to at least the fourth generation (G4+) and are sometimes qualified for convenience as ‘descendants of native-born French people’.

All results shown here are weighted. They are also age-standardized: the distribution of respondents’ ages in the various groups is weighted to fit the age distribution of descendants of native-born French people.

The educational level of the surveyed parents is that of the most highly educated of the two parents.

1.1. A sharp rise in educational levels as early as the second generation

Beyond age 30, when most people have completed their education, the most notable progress in educational level is observed between immigrant parents (first generation, or G1) and their children born in France (second generation, or G2). In these families, the proportion where at least one parent has a tertiary qualification is just 1 in 20, compared with almost 1 in 3 among their children (Figure 1). This is still well below the 43% of tertiary-educated children among those with French-born parents (G4+ in our notation, with no immigrant ancestors before the fourth generation). For children of mixed-origin couples (G2.5) the proportion is similar, at 41%, while among people with at least one immigrant grandparent (G3), it is 44%. So having one parent born in France is sufficient to reach the same educational level as the rest of the population.

If we now look at ‘educational mobility’ (i.e. not the distribution of educational levels in each generation but rather the progress achieved with respect to the previous one), it is the children of immigrants—whose parents often have little initial schooling—who cover the largest distance, with 70% achieving a higher level than their most qualified parent (Table 1). The proportion is around 55% among those with one non-immigrant parent or with immigrant grandparents only.

These generational differences are partly explained by the fact that the children’s generation attended school at a time and in a society where more students continued into tertiary education. But intergenerational progress and the degree of convergence with native-born French people vary considerably by origin.

Families of North African and Southern European origin (Figure 2) form a first profile. While few parents in this group are tertiary educated (less than 3%), more than a third of the children have a tertiary qualification. Hence the high percentage of children—70% and 80%, respectively—who are more qualified than their parents. This sharp increase within a generation is not explained solely by limited access to tertiary education in the countries of origin; it also reflects immigrant parents’ strong investment in their children’s academic success [1]. The level reached is nonetheless below that of children with native-born French parents (43%), except for the children of mixed-origin couples. By the third generation, the descendants of European migrants have caught up with the descendants of native-born French people (Figure 2).

Families of sub-Saharan African and Asian origin form the second profile. In this group, a larger share of parents has a tertiary qualification than among the native French: a third and a quarter, respectively, versus one-fifth. The proportion is 40% for mixed-origin couples. This finding shows that the profiles of immigrants in France are changing. The diversification of origins is associated with a rise in educational levels as emigrants become increasingly selected with respect to those who stay in their home country [2, 3].

This means that there is less margin for progress with respect to the parents’ generation (Table 1). Moreover, a larger share of these children has a tertiary qualification than the children of native French-born parents (43% among the latter vs. 50% for children of one or two African parents, 54% for children of two Asian parents, and even 64% for children with one Asian parent). The success of descendants of Asian immigrants is regularly highlighted, but given the negative representations of African migration in France, the performance of students of African descent rarely receives the attention it deserves.

The third profile is that of families of Turkish and Middle-Eastern origin. It is characterized by a low share of tertiary-educated among both the parents (5%) and the children (below 18%) (Figure 2). While 2 in 3 children have a higher educational level than their parents, this profile corresponds to the least qualified immigrant-origin group. The children’s trajectory in France does not make up for past disadvantage.

It is a well-known fact in France that girls perform better at school than boys. This is also true for the daughters of immigrants (Figure 3), who outperform sons in achieving a higher qualification than their parents (Table 1). These gender differences in educational mobility across generations are observed most acutely in families from Turkey and the Middle East, in which 76% of girls have a higher qualification than their parents versus 55% of boys. This female advantage is slightly less marked in families from sub-Saharan Africa (57% of daughters are more qualified than their parents vs. 43% of sons) and North Africa (73% vs. 66%). When compared with the parent of the same sex (and not with the highest qualification across both parents, as is the case here), the progress from mothers (less educated, on average, than fathers) to daughters is even more spectacular.

1.6. Lower returns to education on the labour market for descendants of non-European immigrants

From one generation to the next, the descendants of immigrants thus tend to catch up with the educational levels of descendants of French native-born people. But what are the returns of these higher qualifications on the labour market? And in particular, what share of tertiary graduates occupy intermediate or higher-level occupations (Table 2)? The proportion is 77% for descendants of French-born people and 75% for the grandchildren of European immigrants. But the share is much smaller among graduates with one or two parents of non-European origin: 63% for those of North African origin, 67% for those with an Asian background, and 71% for those with origins in the rest of Africa. These differences by origin can be explained partly by hiring discrimination, a well-attested phenomenon [4]. In all groups, the labour market returns to a tertiary qualification are lower for women, largely because they more frequently leave the labour force.

The descendants of immigrants achieve much higher educational levels than their parents. Yet despite this progress, the second generation does not fully catch up with the native-born population. This is especially the case for the children of immigrants from Southern Europe, North Africa, and, above all, Turkey. For children of mixed-origin parents and the third generation of European origin, the levels are similar to those of children of native-born parents. And what about the grandchildren of non-European immigrants? The TeO2 survey drew an additional sample for this population. Data from this sample, along with the information collected on the children’s education, will be used to answer this important question. It remains true that having a tertiary qualification does not guarantee equal access to the labour market across origin groups. Educational mobility favours social mobility but provides no guarantees.

While children born to immigrants in France are more qualified than their parents, their educational levels are nonetheless below those of children with French native-born parents. In families of Asian and sub-Saharan African origin, the parents more often have a tertiary qualification than French-born parents. In families from Turkey and the Middle East, on the other hand, the parents’ educational level is low, and the progress of their children is limited, making this group the least qualified of all immigrant-origin groups. It is well known that girls outperform boys at school in France. This is also true for the daughters of immigrants, who achieve a higher educational level than their parents more frequently than sons do.

How do immigrants name their children in France?

Immigrants’ educational attainment: a mixed picture, but often higher than the average in their country of origin

How should the diverse origins of people living in France be described?

Transnationalism and Immigrant Assimilation in France: Between Here and There?