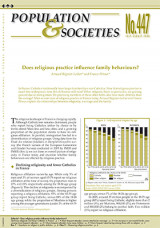 Subscribe to the e-alert
Download
In France, Catholics traditionally have larger families than non-Catholics. Now that religious practice is much less widespread, does this difference still exist? Other religions, Islam in particular, are gaining ground due to immigration. Do practising members of these other faiths also have more children than the average? After an overview of religious practice in France today, Arnaud Régnier-Loilier and France Prioux explain the relationships between religiosity, marriage and the family.
According to the Étude des relations familiales et intergénérationnelles survey conducted in 2006 by INED and INSEE, 80 % of people in France aged 18-79 report being Catholic (by choice of birth), 5% Muslim, 2 % Protestant, 2% a different religion and 11% say they have no religion. But this distribution varies considerably by age: the youngest cohorts less often report a religious affiliation, and when they do, they attend religious services less regularly than their elders.
The more frequent attenders, now a small minority, remain more strongly attached to marriage and less often experience several successive unions. They also have more children: among women ever in union born in 1960, more frequent attenders have 0.6 children more than the others. Women practising a religion other than Catholicism, notably Muslim women,are not responsible for the whole of this difference, since the more frequently practising Catholics have 0.5 more children than the orthers.

A Longitudinal Approach to Family Trajectories in France

The unemployment delays the arrival of the first child in France

Analysis of determinants and prevalence of LAT