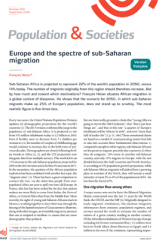 Sub-Saharan Africa is projected to represent 22% of the world’s population in 2050, versus 14% today. The number of migrants originally from this region should therefore increase. But by how much and toward which destinations? François Héran situates African migration in a global context of diasporas. He shows that the scenario for 2050, in which sub-Saharan migrants make up 25% of Europe’s population, does not stand up to scrutiny. The most realistic figure is five times less.

Does Europe need to prepare for a coming “surge” of sub-Saharan migrants? This prediction is based on a model of communicating vessels that fails to take into account three fundamental observations:

1) compared to people in other regions, sub-Saharan Africans are less prone to migrate, due to poverty;

2) when they do emigrate, 70% move to another sub-Saharan country;

3) according to UN demographic growth projections, while sub-Saharan African migrants will have a growing place in societies of the North, they will remain a small minority: around 4% of the population in 2050 – far below the 25% that some have claimed.

Lost generations: The demographic impact of the Great War

Demography and its vocabulary over the centuries: a digital exploration

What happens when the census population figure does not match the estimates?

Language transmission in France in the course of the 20th century.

The world population over the next three centuries: explosion, implosion or equilibrium?

Two children per woman in France in 2006: are immigrants to blame?

No English please! Survey on the languages used for research and teaching in France